For this post I’ve been asked to talk about what makes my fantasy world(s)–because I have several–unique. Happily, this is something I’ve put a lot of thought into!

I’ll start with my main fantasy world, which I feature in The Zemnian Series.

Book 1 in The Zemnian Series, The Midnight Land, features, among other things, magical Arctic foxes. What could be cuter?

The main country in The Zemnian Series is Zem’, which means “Earth” or “Land.” It’s a Russian-inspired place, with one key difference: it’s a matriarchy.

Actually, that’s not so different. We know from The Tale of Bygone Years, the oldest chronicle of Kievan Rus’, that matriarchal societies existed in the territories that eventually became Rus’ and then Russia. Unfortunately, we don’t know much about them. We also know that the Scythians, who lived in what is now part of Ukraine and southern Russia, had what appeared to be warrior princesses.

Valya, the heroine of The Dreaming Land, is a Cossack/Scythian-inspired warrior princess from the steppe.

Warrior princesses aren’t that unusual in fantasy, and there’s been a bit of a fashion for Russian-themed fantasy recently, with books like The Bear and the Nightingale, Deathless, and Egg and Spoon coming out in the past few years. But, I would argue, my world has a couple of unusual things about it.

First of all, in case you haven’t guessed from my writing style and the casual way I throw about phrases like “Kievan Rus’,” I actually have a PhD in Russian literature. So my books are stuffed to the gills with allusions and Easter eggs, just waiting for other fans of Russian literature to find them. And more importantly, I’m approaching it from a much more “Russian” perspective than most Western writers.  If you want to read more about some of the Russian cultural and literary references in my works, you can check out this post about Russian fairy tales, this one about medieval epics, and this one here about Chekhov and Dostoevsky.

Second of all, I took my matriarchy very seriously, and tried to think very hard about what it would actually mean to have a female-dominated society. Most of the ones I’ve encountered in literature are either fantasies, or simple inversions of our current society, with women acting like men and men acting like women.

That, I decided, was nonsense. A matriarchal society would be very different than a patriarchal society, even though people would still remain basically the same. The women running it would certainly be no angels, but they also wouldn’t act like men. They’d act like themselves.

At the same time, I had to portray women who were certain in their own power and right to rule. This meant inverting ideas of what makes someone good leadership material. For example, in Zem’ men are considered unfit for rule because they mature late, die young, have a harder time learning to read, and are more prone to violence. Plus matrilineal succession is much easier to keep track of. Zemnian parents pray for daughters, and men join their wives’ families when they marry.

Writing a female-centered, female-dominated society was actually much more difficult than I expected it to be, and really drove home how much even I, a hard-core feminist since early childhood, have imbibed and accepted the norms of a patriarchal, patrilineal, male-dominated society. My only comfort is that I’m not alone: other fantasy writers who’ve created gender-neutral or female-dominated worlds have reported similar difficulties.

And Now For Something Completely Different

Having just said that, for The Giaco & Luca Series, which I’ve just started releasing this month, 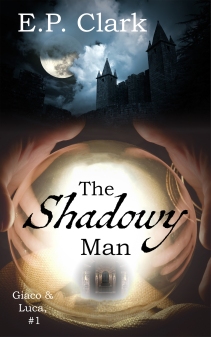 It’s release week for “The Shadowy Man”! Get it FREE here.

is about a man and a boy. But not to worry! While it features mainly male protagonists, I use them to explore traditionally “feminine” emotional states, such as affection and, most prominently, fear.

The other thing that’s a bit different about the Giaco & Luca stories is that they’re based in a kind of fantasy version of Renaissance Florence. And they’re partly mysteries. I’m sure that Italian-based fantasy is out there, but these stories are definitely a break from the traditional British Isles/Central European setting of most English-language fantasy. Since I once, far too long ago, lived in Milan, mentally revisiting Italy and brushing up on my Italian skills has been a ton of fun.

I’m sure I could say tons more about my worlds, but I think that’s about enough for now, don’t you? Thanks for reading!