The Giaco & Luca series is a trilogy of long novellas/short novels set in a world inspired by Renaissance Italy, but where magic is real. It follows the adventures of the magically talented Prince Luca and his decidedly non-magical bodyguard, Giacomo da Prado. Each story covers a 1-3 days and involves some kind of mystery or quest.

Giaco, famed battle hero turned bodyguard, is a Reborn man. He believes in reason, harmony, and intellect, and leaves magic for the foolish and superstitious. But when his charge, young Prince Luca, is stolen away, Giaco must set off on a search that will cause him to question everything he believes.

The Rebirth is changing the face of La Città dei Fiori, but the old ways still hold sway, especially in the dark places of the city. In order to get Luca back, Giaco will have to undergo a different kind of Rebirth—one of fear and shadow.

Set in a magical version of Renaissance Florence, The Shadowy Man will appeal to fans of paranormal and occult suspense, as well as dark and historical fantasy.  It is the first book in the Giaco & Luca series but can be read as a standalone. 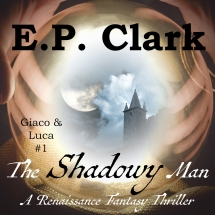 Book 2: Half a Dream 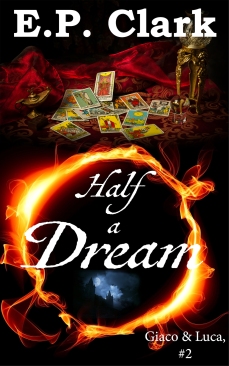 The dark gods of battle are cruel and capricious, and require sacrifices worse than blood.

It’s been four years since Giacomo, bodyguard to Prince Luca of Fiori, followed his charge down into the shadowy world of forbidden magic. When Luca disappears once again, Giaco must cast aside his disbelief and delve into the world of fortune-telling and shadow-walking in order to find Luca and bring him back to safety.

And beyond that, he must face up to his own worst fears. Everyone considers Giaco to be a hero, but he is about to learn the true meaning of heroism. More than his own life depends on it.

Set in a magical world inspired by Renaissance Florence, this fantasy thriller will appeal to fans of dark and historical fantasy, as well as paranormal and occult suspense. This is the second book in the Giaco & Luca series, but can be read as a standalone.

Book 3: The City of Shadows

There is no courage without fear…

Eleven years ago, Royal bodyguard Giacomo da Prado first followed young Prince Luca into the shadows. Plunged against his will into a world of illicit magic, Giaco has tried to hold onto the rationality of a Reborn man, even as he walks the line between the two worlds.

But now, called upon to serve as Prince Luca’s bodyguard once again, Giaco has to face all his worst fears. Luca has disappeared into the shadows—and Giaco’s beloved wife, the famed card-reader Amanda, is in danger of being pulled after him. Can Giaco overcome his training and his innate distaste of dark magic in order to save the two people he loves the most?

Set in a magical version of Renaissance Florence, The City of Shadows will appeal to fans of paranormal and occult suspense, as well as dark and historical fantasy. It is Book 3 in the Giaco & Luca Series, but can be read as a standalone.