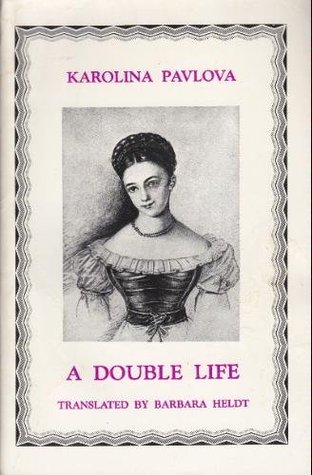 Although of course Russian literature is the best literature, or something like that, it does have a significant flaw, which is the dearth of female authors, especially from the Golden Age when Pushkin and his Pleiad were writing. Some have claimed that the brilliance of Karolina Pavlova makes up for the lack of other female authors. I wouldn’t go so far, since one person, no matter how brilliant, cannot make up for all the other people who should be writing, but there’s no question that Pavlova’s brightly shining star should have had pride of place in the Pleiad, instead of being shunted off to the side and largely dismissed by her male counterparts.

Sadly, the situation has only slightly improved in the intervening century and a half. Pavlova was revived by the Silver Age poets, and served as a source of inspiration for Tsvetaeva in particular, and she has sparked some interest in contemporary scholars, both for her unusual status as a female writer from the early 19th century and for the daring formal features of her work, but she remains tragically understudied and under-read. The existence of only one English translation is a case in point; while Barbara Heldt’s translation is perfectly serviceable, a figure as important as Pavlova should have multiple translations of her work available in and print.

This is especially the case since “A Double Life” is so formally experimental, with chapters opening in prose, to describe the protagonist’s waking life, and ending in verse, as she slips into dreams. There are numerous translation approaches that could be taken, but thus far English readers only have the option of one. Which again, is perfectly serviceable, but the text cries out for annotation, discussion…all the critical apparatus that works by male authors have received, but “A Double Life” has not.

That being said, both the English edition and the original Russian are must-reads if you can get your hands on them. “A Double Life” tells the story of Cecilia, a young upper-class Russian girl of German heritage, rather like Pavlova herself. Cecilia is approaching that interesting age when the only thing for girls of her time and class to do is to seek out a suitable husband. This is her mother’s biggest concern, and Cecilia is easily persuaded to believe herself in love and agree to a marriage to a not-very-suitable, as it happens, man.

Pavlova, whose personal life was not of the happiest, can be compared to Jane Austen, but she is much more pessimistic–and much more stridently critical of a society that pushes young women into ill-advised marriages. In fact, some of Pavlova’s statements sound shockingly feminist even today, as she presents a story that focuses almost entirely on women–the men are largely there as sexual and marriage objects, although she does get in a few digs about the lightmindedness of Cecilia’s intended–and yet shows how these women act to perpetuate the system of oppression that they are all mired in. Because in truth, there are few options for Cecilia other than marriage, and her mother may be right in pushing her into it…but not that marriage, not at such a young age, with such an ignorant mind that wears an invisible corset, just as her body wears a visible one. In one of the sharpest and most insightful critiques of social oppression, Pavlova notes that, “If it were only bad mothers who acted such, the problem would not be so very great. There are not very many bad mothers. But these are the best mothers.”

Indeed. There are not very many bad people in the world. Most of the time, they are the not the ones we have to fear. It’s the best ones, with the best intentions, who can do the most damage. Pavlova’s observations remain as pointed now as they did in 1848. If you have not yet read this book, run, don’t walk to wherever you can find a copy.