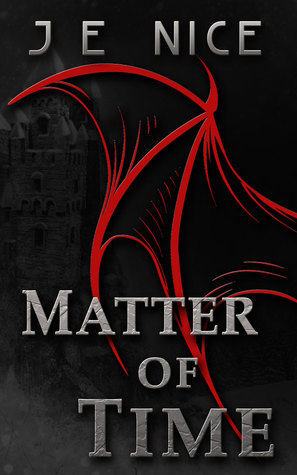 In “Matter of Time,” dragons and humans co-exist in harmony–sort of. They live in the same city and work together, and the current king, chosen by humans and dragons alike, is a dragon, and everything seems great. Except for the screams and the disappearances. Something is definitely going on, but no one is brave enough to say what.

The concept of a city in which humans and dragons live together in a carefully-negotiated peace is an intriguing one. In this book, both are treated as sentient beings with equal rights but who have a history of past wars, making it difficult for them to trust each other. There’s still a dragonslayer order, which is made up of humans trained to deal with rogue dragons, but they’re having trouble dealing with the rogue-est dragon of them all.

“Matter of Time” has an epic/sword-and-sorcery setting, taking place as it does in a completely imaginary secondary world, but it’s more of a suspense or detective novel than it is your typical epic or adventure story. Told from multiple points of view, it follows various characters as they try to figure out what’s causing the screams and disappearances, and then how to thwart the evil once they discover who’s behind it. It ends with the first mystery solved, but with a bigger mystery tantalizing the characters.

It also features not one but two, or maybe three, depending on how you want to look at it, plucky heroines: the inquisitive maid Tabitha, the exiled dragonslayer Del, and the up-and-coming officer in the dragonslayer order Andra, who’s charged with arresting Del, the woman who inspired her to become a dragonslayer in the first place.

Like most books with an epic fantasy feel, it’s not super-short, but it’s not super-long either, and is an easy read. Recommended for readers looking for something on the light side that features dragons, heroines, and mysteries.

Today and tomorrow only, you can pick up a free copy of “Matter of Time,” plus a number of other complete fantasy novels featuring female protagonists, in the Heroine Chic Giveaway.