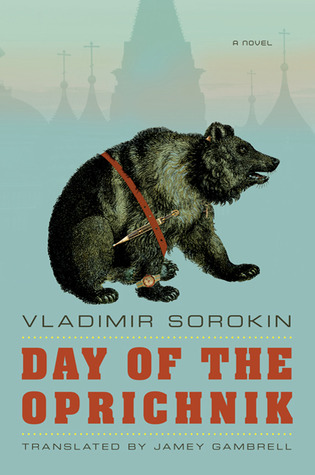 “Day of the Oprichnik” has been hailed as one of the classics of post-Soviet fiction, and for good reason. It’s a brilliant satire of Russian society past and present. It’s also deeply disturbing and difficult to read for that reason.

But first, the title. Since Russian doesn’t have articles, the literal translation of the original (День опричника) would be “Day of Oprichnik.” “Day of the Oprichnik” is a good, English-sounding translation, that also has a nice punch to it, but the book could have more accurately been called “One Day in the Life of an Oprichnik.” It covers a 24-hour period of brutality, debauchery, and illegal dealings in the life of an oprichnik in a future Russia where sci-fi technology exists alongside a return to the society of Ivan the Terrible (the original oprichniki were Ivan the Terrible’s personal guards). Comparisons to Solzhenitsyn’s “One Day in the Life of Ivan Denisovich” spring naturally to mind. But, in contradiction to what one might expect, while Solzhenitsyn’s book about life in a forced labor camp is ultimately a celebration of the strength and inherent goodness present in the human spirit, “Day of the Oprichnik” is the opposite. “Ivan Denisovich” will leave you uplifted. “Oprichnik” almost certainly will not.

Like Tatyana Tolstaya’s “The Slynx,” “Day of the Oprichnik” depicts a dystopian future that combines the worst aspects of pre-Soviet, Soviet, and post-Soviet Russia. There’s horrific brutality, byzantine bureaucracy, deep-rooted hypocrisy, and widespread corruption, all under a totalitarian autocracy that’s closed itself off from much of the rest of the world (the exception is China, and Russian society is becoming increasingly Chinese). The oprichniki carry out their mission of cleansing and protecting the Russian state by murdering nobles who have fallen afoul of the Tsar and sexually assaulting their wives. They engage in openly corrupt infighting with other branches of the government, and relax by taking illegal drugs and having sexual orgies as a form of ritual bonding exercise.

“Day of the Oprichnik,” like other works that attempt to deal with the very darkest aspects of human behavior, begs the question of whether it is ever possible to depict violence and assault without glorifying it. Both “A Game of Thrones” and “The Girl with the Dragon Tattoo” were charged with normalizing and glorifying violence against women, even as their authors seemed genuinely intent on speaking out against it. In “Day of the Oprichnik,” Sorokin seems intent on exposing at least the hypocrisy of the oprichniki, who preach purity but practice assault. But in this case, where the victims are throwaway characters and the only emotion the readers are shown is the protagonist’s pleasure in violation, it’s even harder to argue that the book is not glorifying appalling violence.

These thoughts take us to the thorny question of what, precisely, should be the limits of speech and literature. “Day of the Oprichnik” could never have been published in Russia prior to the collapse of the Soviet Union, and with increase in censorship in recent years, it’s questionable whether it could be published now. Most westerners and liberals would argue that censorship is bad. But the freedom that Russian literature gained following the fall of the USSR was used to churn out a flood of books that wallow in the very worst that human nature has to offer. The “chernukha” that was pumped out in the 90s and early 2000s is an interesting cultural phenomenon, and may have served as a necessary detox, but its utility and the morality of its very existence is an open question. If nothing else, it points out the necessity of societies engaging in a little self-censorship in order to avoid destroying the weak and tearing themselves apart. Not all thoughts should be spoken out loud or committed to paper.

I’m not calling for the censorship of “Day of the Oprichnik”–far from it. As a dazzlingly clever synthesis of Russian culture through the ages, and a window into the apocalyptic despair caused by the collapse of the USSR, it is an invaluable document. If you’re a student of the post-Soviet condition, you should read it. But we probably don’t need too many more such books.

Buy on Barnes and Noble or Amazon.