Last week I wrote about how Valya, the heroine of my upcoming release The Dreaming Land, was a “bad girl,” both by the standards of her society and of ours. She’s a bit–well, more than a bit–of a femme fatale, at least in the minds of other people. In fact, I have an ad going right now on Facebook about how she’s a cross between Eowyn from The Lord of the Rings and Melisande from Kushiel’s Legacy.

I hope that sounds as intriguing to you as it does to me.

Anyway, every femme fatale needs an ingenue as a foil. Delightfully enough, Valya’s ingenue is really an ingenu, the innocent young man she’s been assigned by the Empress to seduce into marriage.

Which brings up some interesting questions for an author, such as: how do you write a male ingenue?

Not all my male characters are so naive and innocent. Urho, from “Wolf Island,” which if you haven’t read yet you can find  in my collection Winter of the Gods and Other Stories, available along with a bunch of other freebies in the Enchanted Woods Giveaway That wolf is definitely not an ingenue. Not sure about the ravens.

is very much a “strong silent type,” your typical male hero, although I hope with a little more depth than some. And both The Midnight Land and The Breathing Sea  have your stereotypical older, more experienced, men in them, although the “love” plot is subverted.

But for The Dreaming Land I wanted to have an actual love story, but with the roles reversed/subverted, so a younger, innocent man and an older, femme fatale-like woman. Which, like I said, brought up all kinds of questions. How do you make a male ingenue (ingenu?) who has those characteristics but is still attractive to straight female readers? I mean, I’m okay with him being attractive to other types of readers as well, but this is supposed to be a love story between a “good boy” and a “bad girl” that still resonates (I hope).

The cliche in such situations is to go for a Taming of the Shrew narrative, where the shy man suddenly becomes aggressive and pushy and the previously bossy woman submits with delight to his demands. Was I going to go with that storyline?

So–spoiler alert!–while Vanya, my ingenu, does become more confident and more assertive (and more experienced) over the course of the trilogy, and does on an important occasion save Valya from her worst impulses, he remains ingenu until the end. I guess it’s up to the readers to decide how they feel about having their gender expectations subverted.

If you don’t have a copy of The Dreaming Land I, in which Vanya is first introduced and the plot to get him married off is revealed, you can snap up a free copy, plus more free books featuring kickass heroines, in the Heroine Chic giveaway. 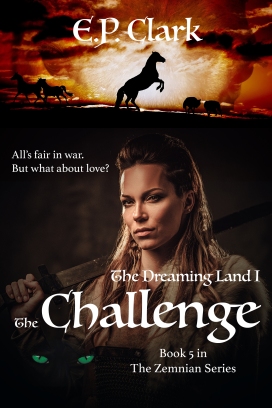 And if you want to pick up a copy of The Dreaming Land II, in which Vanya’s innocence is, shall we say, challenged (but his heroism comes out), you can get one, plus many books featuring men with six-pack abs, in the Summer July Hot Books giveaway.

My cover is rather less racy than many of the others in that giveaway. Some of the interior is pretty wild, though.