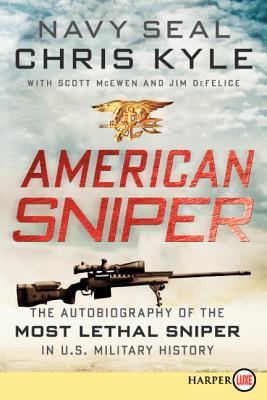 “We were slaughtering them,” brags Chris Kyle, America’s most prolific sniper, in his bestselling memoir that spawned the hit movie directed by Clint Eastwood.

The “them” here refers to Iraqi insurgents, of whom Kyle killed close to 200, something he attributes largely to luck and being in the right place at the right time. Kyle, a Navy SEAL with four deployments to Iraq, has moments of almost endearing humility sprinkled throughout the narrative: he admits to disliking diving and jumping out of planes, and was afraid of sharks. In one of the few genuinely honest and raw moments of what is, for all its apparent openness, a cleaned up and superficial story, he describes collapsing on the beach while trying to make it through Hell Week of his SEAL training with a broken foot, praying for someone to urinate on him in order to warm him up. If he could have reached the bell that trainees could ring to pull them out of training and get sent home, he would have rung it at that moment, but it was too far away for him to make the crawl, so he ended up finishing Hell Week and the rest of the program and earning his SEAL trident.

Most of the actual combat Kyle describes is less interesting than his training, perhaps because he seemed to “feel” it less. As the text progresses he grows more and more distant not just from his wife and family, but from himself, only returning to himself in extreme moments, like the deaths of squad mates or his own near-death experience when he is shot twice in the space of a couple of minutes, miraculously escaping with only minor injuries.

Indeed, “American Sniper” is a strange thing. Kyle appears to open up about all kinds of things, to the point of including passages written by his wife about their disintegrating marriage. But the overall impression is of something polished, packaged, and surface only, not because Kyle was deliberately attempting to do that, but because that was all there was to him. A man of action rather than words, he doesn’t seem to know what to with deep or complex thoughts, and thus avoids them.

Which is not to say that “American Sniper” is not full of food for thought, because it is. Kyle may be oblivious to the parallels between him and the people he is fighting, but in places they are glaring: in one of the more telling moments, he shoots a teenage boy and then watches as the boy’s mother runs out to his body, wailing and tearing at her clothes in grief. He says that he never feels sympathy for the grieving relatives of his kills–if they didn’t want their loved ones to die, they should have stopped them from fighting the Americans. This scene comes shortly after he reenlists and leaves for another tour of Iraq against his wife’s explicit wishes, a connection he never seems to make, just as he never seems to make the connection between his love of the American flag, the Crusader cross he has tattooed on his arm, and the patriotism and religious faith motivating the insurgents he was fighting. Kyle sees things in black and white, as he admits himself, and he is firmly on the side of the righteous, while anyone who opposes him or disagrees with him must be on the side of evil.

An article in The New Yorker about Kyle and his death at the hands of a deeply disturbed fellow veteran whom he was trying to help out by taking him to a gun range (what could possibly go wrong, some of us would be uncharitably inclined to say) suggests that, despite his avowed black-and-whiteness, Kyle had a somewhat flexible relationship with the truth–not about his confirmed kills, but about other incidents while he was in the US. If so, that is interesting, since Kyle, like many veterans recounting their combat experiences, insists on the truth of what he is saying and says that no one who wasn’t there can possibly understand, while apparently having a hard time separating fact from fiction. And while Kyle was in some ways an exceptional soldier, his experiences and his troubled relationship with his homeland and with civilians upon his return were anything but exceptional. As America’s involvement in Afghanistan, now our longest-running war, enters its sixteenth year, it is worth remembering that the country is filling up with thousands and thousands of Kyles, all of whom are not just suffering, but voting, often to continue the only thing to understand: war. America has always been a violent nation, and the more violence people commit, the more they gain a taste for it. We are now a nation of people literally addicted to war.