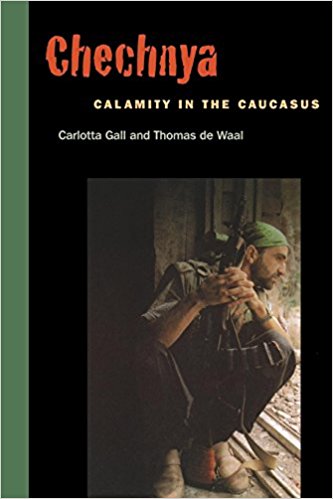 An account of the first Chechen war written by two journalists who were on the ground when it happened, interviewing the leaders and even spending time embedded amongst Chechen units, “Chechnya: Calamity in the Caucasus” is both a thorough overview and a riveting story of the first war. Although it is distinctly dated by being written before the outbreak of the second war, it is still a a highly useful resource for anyone interested in contemporary Chechnya, or who wants to read some compelling war reporting.

It begins with the story of the ill-fated New Year’s Eve storming of Grozny by Russian forces, and then backtracks to give a historical overview of Russia’s conquest of the Caucasus and Chechnya’s experiences under the Russian empire and the USSR, particularly the mass deportation of Chechens to Kazakhstan during WWII, before returning to the war. There are in-depth portraits of many of the leaders involved, especially Dzhokhar Dudayev, but also Basayev and others, and descriptions of the official and unofficial negotiations that occurred before, during, and after the war. There are also a number of fascinating, if at times gruesome, photographs.

This is a journalists’ book, and as such it is both full of detail and written in an engaging, casual style, making it useful for both academics and non-academics alike. The authors, while not blind to the flaws of 1990s Chechnya, have, like many Western reporters, a pro-Chechen slant, which is understandable under the circumstances–and goodness knows the Russians won themselves no friends during the war–but now, twenty years later, has tragic undertones. It is hard to look at pictures of a smiling Shamil Basayev and read about his intelligence and charisma–although I’m sure he had them, and in spades–with the knowledge of what he would go on to do, and the authors’ hopeful predictions of the future that Chechnya could have in store have not come to pass. Still, this is the problem that all works on volatile regions have, and does not detract from the quality of the reporting on the events leading up to and during the first war. An essential read on the first Chechen war.