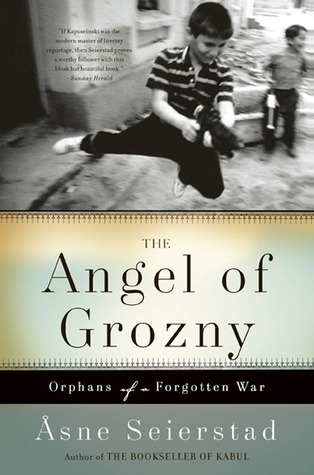 Asne Seierstad was a freelance journalist in Moscow when the first Chechen war broke out. Acting under a poorly-understood compulsion to find out what was really going on there, she sweet-talked her way onto a military transport plane and ended up in Grozny. She spent several months during the first war, and again during the second war, slipping around Chechnya, often disguised as a Chechen woman in order to avoid attention and get into places foreigners were forbidden to enter, so she could interview people touched by the conflict. Hosted by Hadijat, a woman running an unofficial orphanage in Grozny, she focuses heavily on the stories of women and children, but also speaks with others, including a couple of encounters with Ramzan Kadyrov, Chechnya’s infamous president. The result is a fascinating book in which interviews and Seierstad’s personal experiences are woven into a more or less coherent narrative.

Seierstad’s own story is riveting: she makes no claims to heroism, but she is obviously a tough and determined reporter, who doesn’t hesitate to visit taboo families, such as the relatives of resistance fighters and even participants in the Dubrovka siege, or to ask Kadyrov probing questions, which he sidesteps with stunning barrages of word salad. The picture she paints of Chechnya’s current leader is grim: while she is slightly more sympathetic than, say, Politkovskaya, mentioning how he sits there doodling flowers with faces and looking sheepish when she asks tough questions, the ultimate impression is of someone utterly unsuited to uphold the dignity of office he represents, and who can’t even sit still and speak in complete, coherent sentences, let alone tell the truth. The allegations of misconduct against Kadyrov are graver than those aimed at the US’s own Donald Trump, but in character, they seem worrisomely similar. But enough about that.

A fluent Russian speaker and originally well-disposed towards Russia and Russians, Seierstad finds herself becoming increasingly appalled by the excesses inflicted by her adopted country on this tiny nation. At the same time, Chechnya and the Chechens are hardly angels themselves: Seierstad recounts horrifying stories of abuse, in which husbands attack their wives, men rape their children, brothers kill their sisters, and Chechens commit dreadful crimes against other Chechens. Giving Chechens more control, in the form of the Kadyrovtsy, has had nasty side effects: under the guise of returning to their Chechen roots, the government has instigated widespread oppression of women, and people suspected of Wahhabism are grabbed off the street, tortured, and sometimes disappeared. All it takes is for a man to wear his hair slightly too long at the back for him to be whisked away, perhaps never to return; women have it even harder in some ways, since they are now forced to wear headscarves and dress modestly, but dressing TOO modestly and covering up TOO much of their hair can be taken as a sign of Wahhabism. The book came out ten years ago, but if anything it seems that the situation in Chechnya has only gotten more dire, something the book foreshadows: it ends, not with a happy story of rehabilitated orphans, but on a warning note: Hadijat’s orphanage is in danger of being shut down, and some of her children are totally out of control, enraging and endangering the others as they act out as a result of the trauma they have suffered.

One thing all of the disparate writers I’ve read on this and other wars agree about is that war reveals whatever a person’s true character is, showing both their strengths and their weaknesses. Reading this book, I was struck by how true this seems not just for individuals, but for nations. Seierstad’s book uncovers some of the pathologies at the heart of both Russia and Chechnya (are they one nation or two? Both, it seems). Caught up in a sick, co-dependent relationship, both nations have retreated into nationalism and attempts to preserve their heritage in the face of external attack. Unfortunately, the parts of their heritage they are trying to preserve are often the very things they should be most eager to throw away. Seierstad chronicles the rising xenophobia of Russian young men, who horrify their grandparents, survivors of WWII, by tattooing swastikas on their bodies, and records how young Chechen men retreat from their problems by attacking women–sometimes verbally, sometimes physically–and torturing dogs. Sometimes nations respond to a terrible self-inflicted trauma by learning from it as they attempt to rise from the ashes: think Germany after WWII, or Rwanda after the massacres of the 1990s. The Chechen wars could have had the same effect on Russia and Chechnya, but they have not. Perhaps they were not traumatic enough (easy to believe for Russia; harder for Chechnya), or perhaps both nations have enough grievances against the other to avoid looking their own flaws square in the face, preferring instead to point fingers and lay blame everywhere but where it lies. What will happen in the future is anyone’s guess, but “The Angel of Grozny” does not give much hope for improvement any time soon, and neither do events since the book was published.

“The Angel of Grozny” is not a light read, but it is informative and compelling. Highly recommended for anyone interested in Chechnya, the Chechen wars, or post-Soviet Russia, or if you’re just looking for a book by and about women affected by war.