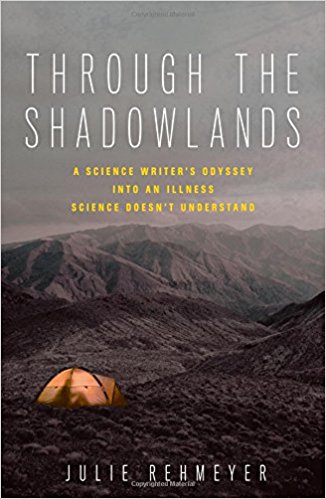 I have a hard time reviewing this book objectively, since so much of it feels almost creepily like I’m reading about myself. The descriptions of the crawling horror of the illness that takes over Rehmeyer’s life are so painfully familiar that I had a hard time restraining myself from shouting out, “Ha! It’s not just me! Take that, doctors!” So for that reason alone, I highly recommend this book to anyone who wants to know what chronic fatigue syndrome, or, to give it its broadest possible definition, ME/CFS/FMS/GWS, feels like. However, this is not just the morbid descriptions of one person’s descent into the “shadowlands” of a devastating and poorly understand illness. It’s not even a triumphant description of her struggle out of that valley of the shadow, although it has that too. It’s also a meditation on what it means to live a meaningful live, and how profoundly undesirable experiences can bring with them unexpected riches.

Rehmeyer’s account of the emotional devastation of grad school (she was studying mathematics at MIT before she, showing better sense than some of us, fled to New Mexico) will no doubt ring true for many academics, and, while most academics don’t develop ME/CFS (although the number is probably higher than we currently know), the problem of mental and physical illnesses plaguing academics from the undergraduate level to full professors is starting to receive more and more press. While for me and for other academics this book may have some interest because of that angle, it is not, however, a story of academia gone wrong, as Rehmeyer goes from institutionally-affiliated academic to science writer fairly early on. She chronicles how she keeps thinking that, while she was haunted by the worry that something had gone fundamentally wrong with her body, it was all too easy, as she dealt with job and relationship worries, to assume that the problem was “just stress,” something that her doctors encouraged her to think. If she could just clear this next hurdle and get her life in order, everything would be fine.

Except that it wasn’t. Eventually Rehmeyer became so ill she could barely walk. Given a diagnosis of chronic fatigue syndrome by the neurologist she consulted, she plunged into the maddening maelstrom of ME/CFS, where it seems like everyone, including most of the doctors who treat it, practices junk science. Is it a psychosomatic illness, the result of laziness and fearfulness, as many doctors characterized it? Rehmeyer’s own experiences, like those of the majority of ME/CFS patients, strongly contradicted that. She writes about how she indeed assumed that she had merely gotten out of shape and unused to exercise, and dutifully attempted to build back up her strength, only for her gains to crumble away, so that she would end up even sicker than before. The treatments of the ME/CFS specialists she visited, although they did take it seriously as a physical illness, did little good either: supplements, special diets, and other treatments would occasionally bring about a brief improvement, only for her to collapse again. Interestingly, one of the things that brought about a fairly long-lasting remission early on in the illness was a trip abroad–I say interesting, because I experienced the same thing myself, although I went to Finland, while Rehmeyer went to South Africa. This certainly argues for an environmental cause, at least as part of the cocktail of triggers, for the illness; I don’t know if anyone’s researched the effects of leaving the country for ME/CFS patients, but I personally found that fascinating.

Anyway, nothing Rehmeyer did, not even after she consulted with some of the top specialists in the world, provided any long-term improvement. This led to a crisis, not just of physical health, but of her thinking; as she said:

“It was a hard thing for me to absorb: Doctors weren’t going to help.

“It wasn’t just that there was no magic pill to fix me. Plenty of other illnesses couldn’t be fixed with magic pills–but at least they had legitimate specialists who would try to help. Chronic fatigue syndrome, it seemed, didn’t count as a ‘real’ illness. The problem was less that people explicitly asserted that CFS was psychosomatic–my friends never said that, and only that one doctor I saw had discussed the possibility–and more that it lacked all the trappings of legitimacy, with proper doctors and blood tests and researchers and conferences and solid information on Web sites. If you told people you had cancer or multiple sclerosis or lupus, you got lots of sympathy. If you said you had chronic fatigue syndrome, you often heard, ‘Oh yeah, I’m tired all the time too.'”

This led, through circuitous paths, to Rehmeyer turning away from “real” science, of which there is precious little on ME/CFS, and deciding to try out a hypothesis she originally considered to be crazy: that her problems were caused by exposure to toxic mold. The second half of the book is the story of her risky journey into Death Valley to attempt a “mold detox,” followed by her growing realization that indeed, mold was the problem, and her subsequent attempts to avoid it.

This was the part of the book I was the most interested in before reading it, and the most skeptical about. I occasionally hear complaints about mold, and I’m always like, “Yeah, yeah, whatever” (eye roll). However, Rehmeyer’s story is certainly a compelling argument that mold can indeed cause serious health problems, and that for at least some patients, it is a major factor in their illness. Which, as I eye the hole in my ceiling caused by the latest deluge here in the rainy Southeast, makes me very nervous. I’m not sure that I’m quite ready to try a mold detox, especially since it sounds like once you do, you have to be ready to get rid of all your possessions and flee to the desert, but reading this book has made me take the idea much more seriously.

This is not just a how-to manual for “treating your own CFS,” though–in fact, it’s not really that at all. It’s much more an intellectual and spiritual journey through a little-understood, although not actually that rare, illness, as Rehmeyer teases out the problems with so many of the studies (she spends a while eviscerating the psychosomatic arguments, and in particular the PACE trials), and also contemplates the lessons she learns from being so ill for so long. To end with a few of her words:

“So much of the pain I experienced then was a result of outrage. I insisted that my suffering had to make sense, that I must be able to control it, that it must be an outcome of a mistake I’d made and would vanish once I corrected it. My rage grew out of my conviction that I had power in the situation, a belief that looked pretty silly now that I no longer had the ability to even lift my head. At this point, suffering felt like just one more experience to be attuned to, as valuable and welcome as joy or silliness or excitement, if far less fun. And I found that when I stopped resisting my suffering, I had more room for other things.”

2 thoughts on ““Through the Shadowlands: A Science Writer’s Odyssey into an Illness Science Doesn’t Understand” by Julie Rehmeyer”