Wow! Is it that time already? It is! The launch day for The City of Shadows, book #3 in the Giaco & Luca series, is here! 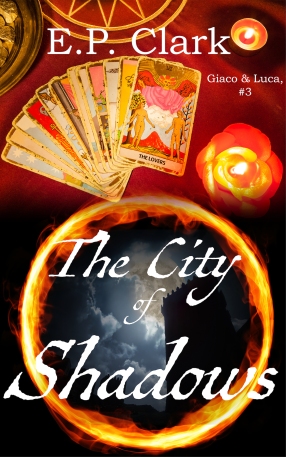 It’s been quite a long road to this point. I wrote the original version of The Shadowy Man, the first book in the series, back in 2007. The basic premise and the opening scene came to me in a particularly vivid dream that caused me to leap out of bed and scribble some cryptic note about “King’s 50” on the notepad I kept by the side of my bed.

Fast-forward three more years, and I wrote book 2, Half a Dream, in a whirl of inspiration that I had been waiting for three years to strike again. I knew at the time that I wanted to make it a trilogy, but it wasn’t until this spring, 2019, that I finally managed to write The City of Shadows.

Why did it take so long? I can’t really say, other than that I had to be in the right frame of mine to write them. All of them had very specific and vivid moments of inspiration, mostly connected to particularly vivid fear-states. All of them are explorations of fear, done in a dark fantasy setting with–and here’s the twist–a male lead character.

I also feel a strong connection to the characters, and I had to wait for the moment to be right to do them justice. And they’re short, and writing short is actually more difficult, at least for me, than writing long. Creating a rich world and an exciting mystery or quest in that compressed format can be a challenge, and I wanted to get it right.

So will I continue with the series? I haven’t decided yet. I’ve fulfilled my original vision and written a trilogy. But now I’m contemplating writing another trilogy, this time about one of the younger characters who appears (spoiler alert!) towards the end of the The City of Shadows. Will I dawdle, George RR Martin-style, over it for another nine years? I guess time will tell.

The City of Shadows (currently free on Kindle, and always free on KU)

And if that’s not enough, here’s an extra-big selection of giveaways for this week!

Let’s start with something close to my heart–the Deep Ecology/Eco Lit giveaway on Bookfunnel. 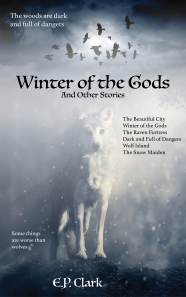 Winter of the Gods and Other Stories is one of the books featured in the select collection that makes up the Non-Romantic Heroic and Epic Fantasy giveaway.

The end of the year is a great time to start something new! Check out theSci-Fi & Fantasy First in Series giveaway.

Looking for an escape? Come take a look at the Enchanted Worlds giveaway on StoryOrigin.

It’s gift-giving time! Including new books for yourself 🙂 Come visit the Give the Gift of Epic Fantasy giveaway, for high and epic fantasy.