But why think about that when you can think about the onrushing summer? So, since it’s summertime, now seems like a great time to let everyone know that ARCs of “Half a Dream,” the second story in my Giaco & Luca series, are available for free in the “It’s a Family Affair” book giveaway. 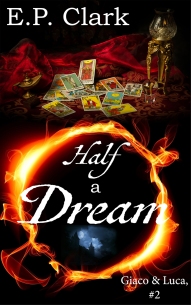 Get a FREE advance copy of “Half a Dream,” and check out all the other family-themed books, in this special Father’s Day book giveaway!

“Half a Dream” is set in high summer, when everything is sunny and hot. Although since most of the action takes place at night, maybe it doesn’t matter that much.

Like “The Shadowy Man,” the first story in the series, “Half a Dream” is set in a world loosely based on Renaissance Florence, only with magic. As you might guess by the cover, Tarot plays a major part in the story, although it’s a Tarot of my own invention. As I mentioned in a previous post, the Giaco & Luca series as a whole is united not just by the main characters, but by the intertwined themes of fortune and fear. Each story features a different kind of fortune-telling; in “Half a Dream,” we meet Amanda l’Interpretrice, the best card-reader in the kingdom. Not only did this allow me to indulge in my interest in cards and fortune-telling, but I was also able to start bringing in some strong female characters, something in which the first story was, I frankly admit, sorely lacking.

Although the series is inspired by Italy and particularly Florence, “Half a Dream” does have a big Russian influence as well. Several times throughout the story, Giaco encounters his father’s sculpture “The Girl and the Bull.” While the subject of the sculpture is clearly the Rape of Europa (check out the Italian Renaissance artist Titian’s version of it in oils here), the actual inspiration for my inclusion of it in the story is the Russian poet Aleksandr Pushkin’s poem “Tsarskoe Selo Statue,” describing this famous statue in the town of Tsarskoe Selo:

Pushkin wrote a series of poems in classical hexameter about statues, of which this is perhaps the most famous. A (prose) translation would be something like this:

Dropping the urn, the maiden smashed it against the cliff.

A miracle! The water pouring from the broken urn will never run dry.

Eternally sad, the maiden sits over the eternal stream.

I have a sneaking fondness for classical hexameter verses, which both Pushkin and his contemporary (and the subject of my dissertation, FWIW) Baratynsky used to great effect. So as Giaco is running back and forth across town, aware of how time is slipping through his fingers, he is repeatedly confronted with his father’s statue of The Girl and the Bull, which, like the statue in Tsarskoe Selo, is a moment of sorrow and terror frozen for eternity, or close enough for our human perceptions.

If that’s whetted your appetite (and how could it not!?!), once again, the link for the giveaway that includes “Half a Dream” is here.

But enough about me! This week I thought I’d pass on some recent releases of fantasy with strong female leads that might interest you. Both are 99c or free on KU.

Elixa is a medieval fantasy thriller “filled with conspiracy, heresy, the might of the medieval church, a mysterious Moor, alchemy, a love-struggle and a touch of the supernatural.” The universal link is here. 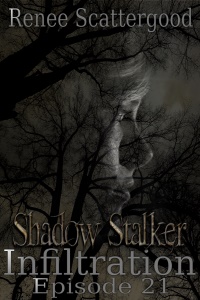 The Shadow Stalker series is a dark fantasy series featuring a young female warrior who must learn to control her powers and save the world. Episode 21 has just been released and is available here.

And now for this week’s selection of giveaways!

The 99c Fantasy Event is full of books (including “The Shadowy Man”!) that are currently just 99c, and many are free on KU as well. 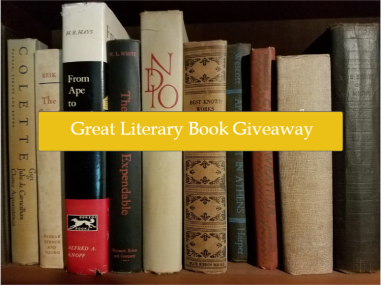 The Literary Fiction Giveaway features books of all genres with a literary bent.

The Kickbutt Ladies of Fantasy giveaway is still going strong!

One thought on “ARCs of “Half a Dream” are Here! Plus Reading Recommendations and Giveaways”