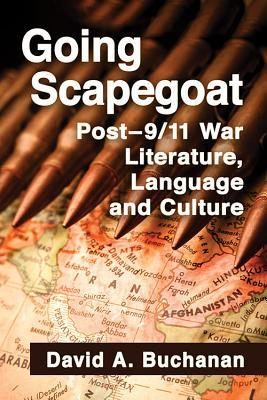 David Buchanan opens “Going Scapegoat” with a story about getting warned when setting off from a very secure American base on a very safe trip to downtown Riyadh “not to get scalped by no Injuns.” This story sets in motion his examination of scapegoating mechanisms in post-9/11 literary and cultural discourse, as well a critique of “combat gnosticism,” the idea that only those who have directly experienced a particular kind of combat have the authority to write about war–civilians and support troops need not apply. These two things–scapegoating and combat gnosticism–he argues, have led to a largely uncritical acceptance of a certain type of war writing, one that sets up an unhealthy “us vs. them” dichotomy. As he says in the conclusion:

“In its [combat gnosticism’s] elitism, it prevents the moral burdens of war from being publicly shared. With every hajji I hear, every recycled Indian War stereotype I encounter, every traumatic tale of hero-wounding I read, I fear that we slide deeper into the comforting shade that the scapegoat provides. It’s nice in the shade, though, so the vicarious redemption that the heroics of war afford is probably here to stay.”

“Going Scapegoat” is a scholarly, theory-backed examination of recent American war literature and the culture surrounding the wars in Afghanistan, Iraq, and now Syria, and is such is not intended as a light read for the casual reader. Buchanan uses the theories of Kenneth Burke to provide a critical framework for his analysis of contemporary American war literature, and the result is a complex and theoretically informed discussion that takes on perhaps the biggest sacred cow of war writing–the primacy of firsthand experience–and highlights some of its problems. Namely, that this insistence on direct (infantry) combat experience is not only inappropriate for the type of modern warfare the US currently finds itself engaged in, where there often is no “front” as such and one can go on “combat” missions that involve no actual combat, only to fall prey to an IED or a stray shell in supposedly safe areas, but that it strengthens the military/civilian divide and allows civilians to disavow responsibility for the wars, scapegoating deployed servicemembers and laying the burden of war guilt on them, even as those doing the fighting scapegoat those whom they are fighting by using pejorative terms such as “hajji” and “sand nig” and using imagery from the US’s conquest of the American native peoples.

Buchanan brings up a number of slippery issues, such as the definition of a fobbit vs. a non-fobbit in his discussion of the book “FOBBIT,” who are these hajjis anyway, and his own right to write this book–a pilot in the Air Force with multiple deployments to the Middle East, he tells us that he flew “roughly 1,200 ‘combat’ hours between 2006 and 2010, and the whole time no hostile enemy ever threatened my airplane.” So is he criticizing combat gnosticism from the inside, or the outside? Who gets to count as a “warrior,” anyway? And in a democracy with a volunteer military, who bears the guilt for the wars that are being waged?

There are not a lot of easy answers to those questions, and Buchanan doesn’t offer any. Instead, he argues for a more critical–in the scholarly sense–approach to contemporary war culture, and a challenge to the hagiography of a certain type of combat veteran, best exemplified by Chris Kyle of “American Sniper” fame. “Going Scapegoat” is probably not intended for the general reader, but it gives a subversive, countering point of view on things that affect the general reader pretty directly.

One thought on ““Going Scapegoat: Post-9/11 Literature, Language and Culture” by David A. Buchanan”