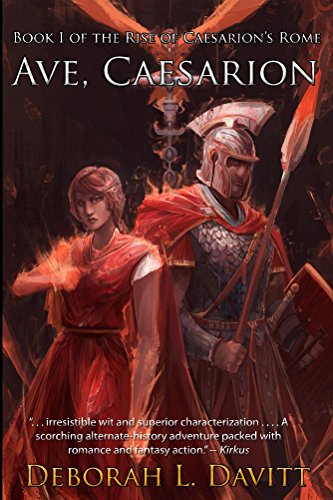 What if, instead of dying, Julius Caesar and Cleopatra had gotten married and produced magical children? That is the premise of “Ave, Caesarion,” a prequel to the Edda-Earth saga, in which we find out how, instead of falling, Rome continued to rule for another two thousand years.

Like them, its biggest strength is its worldbuilding, which is truly impressive. The life of ancient Rome is depicted in minute detail that still manages to feel alive and immediate, as do the characters, whether they are real historical people such as Cleopatra or Mark Anthony, or fictional, like Cleopatra and Caesar’s children. The alternative world and alternative history that has been created feels as real as the real thing, maybe more so, as does the magic that they wield.

The characters themselves are also compelling, although WARNING! This is not a book for the prudish! The sex is not exceptionally graphic, but there are Hellenes involved. And Egyptians. The unusual arrangements that some of the characters end up in feel natural and relatable and not at all perverse, but…they are unusual.

Like the other books in the series, this one features a powerful female character (although Eurydice is very different from Sigrun) in the highly masculine world of Rome, and like the other books, this one flirts with different approaches and understanding of the problem of female empowerment against a masculine backdrop. Eurydice is not a warrior, but a sorceress, something the other Romans are very uncomfortable with, just as they are alarmed by the magic, often wielded by women, that the “barbarians” they are attempting to conquer use against them. Eurydice thus walks a very fine line: she can only be accepted by Roman society by proving her worth in the masculine sphere of the army, fighting against women whose rage against Rome is well-founded, and she is by and large happy to do so, and to scorn the other Roman women as well, whom she considers (largely correctly) to be narrow-minded, shallow, and lacking in the bonds of sisterhood that would parallel the bonds of brotherhood that the men who serve together forge. The books ends just as she is coming into her true power, so what will happen next is yet to be revealed.

“Ave, Caesarion” is not a short read, and while it’s quite a cracking story, it’s dense with worldbuilding detail, as well as thought-provoking issues of empire-building (its Rome deals with many of the same things that modern-day America does–unfortunately, I fear our current leader may not be as thoughtful as Caesarion). So if you’re looking for a quick, light read, this is probably not the book for you, but if you enjoy thoughtful, intriguing fantasy or alternative histories, you should definitely check it out.