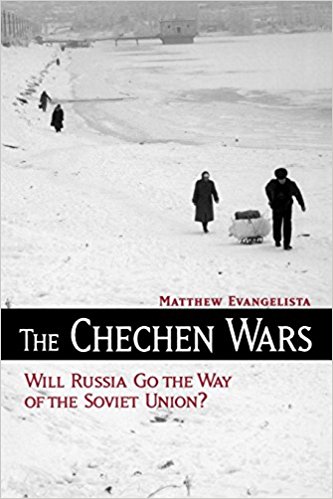 A historical overview of the first Chechen war, and the first couple of years of the second, with comparisons of the Chechen situation with that of other autonomous republics of the RF such as Tatarstan, and discussions of possible outcomes.

This is a detailed and informative book on post-Soviet Chechnya. While well-written, it is unquestionably a scholarly examination of the topic by a trained academic, and should be approached as such: the point of such a book is not entertainment, but an in-depth analysis of the situation. Readers should not pick this up expecting a light read or a quick introduction, but it should be of interest to scholars–of the professional or armchair variety–wanting to learn more about contemporary Chechnya.

Although the situation has changed since 2002, a number of the things that Evangelista discusses, particularly the historical background and the events of the 1990s, are still highly relevant. Of particular interest is his comparison of Chechnya with Tatarstan and Bashkortostan: following the breakup of the Soviet Union, all three regions seemed at risk for leaving the Russian Federation, but Tatarstan and Bashkortostan both negotiated favorable arrangements with Moscow that kept them within the RF while maintaining an acceptable amount of independence and control over their economies and natural resources, while Chechnya fell into not one, but two bloody wars that left its capital the most destroyed city in the world and provoked comparisons with Stalingrad. Evangelista traces the various reasons for this, beginning with Chechnya’s long-held status as the most rebellious of the empire’s regions, and ending with the personality conflicts that arose between Boris Yeltsin and Dzhokhar Dudayev, neither of whom were the man for the job when it came to negotiating delicate peace settlements. Evangelista believes, probably correctly, that there were multiple moments when either or both of the wars could have been avoided, but every single opportunity was squandered, perhaps because, as he says, the wars were “overdetermined”: there were so many factors pushing both sides towards war that it is impossible to say which was the deciding one, and perhaps the wars were simply part of the inevitable iron progress of history.

The one section that feels dated 15 years later is Evangelista’s critique of Western leaders for cozying up to Putin despite Russia’s regrettable lack of regard for human rights in Chechnya. These days Western leaders are by and large vastly more critical of Putin and Russia than they were back in the early 2000s. However, the current sanctions and Russia’s expulsion from the G-8 have, arguably, only hardened Russia’s stance vis-a-vis both its internal affairs, and its relationship with the West. The hard truth may be that Russia has never been under the West’s control, not even when it was reeling from the collapse of the USSR, and all attempts to make it toe the line or stand in the corner like a naughty schoolboy are doomed to failure, no matter how egregious its human rights–and other–violations may be. Russia has, quite accurately, accused the US of trying to be the world’s police force; certainly the US is the world’s police state, which seems to be causing a number of problems at home and abroad. Russia’s attempts to impose “a dictatorship of the law” on its unruly periphery have led to wide-scale destruction, something that should serve as a warning to other countries wishing to do the same thing. A re-envisioning of the relationship between the US and Russia, one without any dictatorship at all, may be necessary before forward progress can be made.