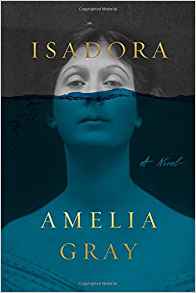 Isadora Duncan was, in her own peculiar way, one of the most influential personalities of the 20th century. Not only did she usher in a new conception of dance, but she embodied the turn-of-the-century ideal of turning life itself into art. Her personal life was at least as theatrical as her performances, and much more tragic. “Isadora” takes one of the most tragic moments of her personal life, the deaths of her children, and turns it into a short but complex novel, in which Isadora and her family members all relate–or fail to relate–to each other and to what has happened to them.

I have had a bit of an obsession with Isadora Duncan ever since seeing a modern dance piece about her and Sergei Esenin, the Russian poet with whom she had a tempestuous, and probably abusive, relationship upon her “defection,” as it were, to the newly formed USSR, but I was less familiar with this portion of her biography, half a decade earlier, when she was living and working in France, and I knew next to nothing about her other family. “Isadora” takes a year in Isadora’s life, 1913-14, and recreates it as letters, musings, and narratives. Isadora herself speaks in the first person, while the other characters all appear in the third person, except when they are writing to other characters offstage, and thus write in the first person…the structure of the novel is, as can be seen, multifaceted and fragmented, with sudden scene shifts, changes in point of view, and jumps in time and space. Like Isadora’s own art, this is not a work for the lazy, but demands the reader’s attention. Not that it is intentionally opaque–in fact, the language is clear and strong, and the separates vignettes are all compact and easy to follow–but it gives a picture of a personality and a family in the process of disintegration under pressure. “Isadora” is unquestionably literary fiction, but of a whimsical, strangely lighthearted sort, rather like Isadora herself.

This is also historical fiction, and shows a wealth of period detail, but it is used with a light hand. The events, the clothes, the food, the modes of transport, the philosophical ideas–everything is integrated into the text naturally, giving the impression of a work that really was written just in the pre-Great War period, when many European thinkers and artists believed that the world was standing on the edge of a new era. We modern readers know that they were right, just not in quite the way they imagined: the aristocratic society that Isadora stood on the fringes of in 1913 was indeed about to be washed away, but in tides of blood, not artistic ecstasy. The dark fate of the world, and of Isadora personally, is hinted at throughout the novel, beginning with the opening description of dogs getting tangled up in their leashes, and ending with Isadora’s sister giving her an extra-long scarf as a gift. The book captures the decadence, the grandiosity, and the tragedy of pre-Great War Europe with precision, making it a pleasure to read for anyone interested in what in Russian is known as the Silver Age, and in one of that era’s most flamboyant personalities.