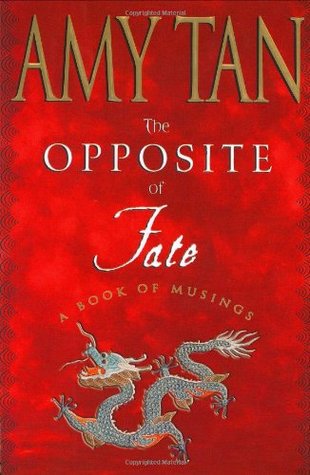 Why is Amy Tan’s writing so great? Tan is one of my very favorite contemporary writers, and so this was a question I kept posing to myself as I read this collection of autobiographical essays on topics varying from Tan’s childhood to the time she was almost swept away in a flash flood while vacationing in Tahoe. Included are musings on life, fate, faith, ghosts, and creative inspiration. While the writings collected here vary in length and quality, they still retain that special Tan spark. So what is it?

Maybe it’s Tan’s understanding that tragedy and comedy are inextricably intertwined. Her stories of her ever-evolving relationship with her mother is the stuff of tears, although sometimes those are tears of laughter. Her account of negotiating her mother’s mental decline in her last years is heartbreakingly hilarious, as Tan finds herself, e.g., lying to her mother about getting divorced in order to trick her mother into liking her husband again. And there’s the whole crazy, crazy, CRAZY story of how her mother suddenly uprooted their family and moved to Europe on a whim.

Or maybe it’s Tan’s semi-superstitious belief in the interconnection of things, something she describes in “The Ghosts of My Imagination,” as she explains her writing process and how, as she stumbles along through a manuscript, she keeps fortuitously encountering things that push her onto the right path and pull everything together. For Tan (like, it has to be noted, her mother in some ways), the world is not just a bunch of random happenings, nor is it purely causal, but rather, held together by a kind of Jungian synchronicity, imbuing both Tan’s life and her works with a sense of connectivity and greater meaning.

Or perhaps it’s her approach to language, formed by her experiences as the daughter of immigrants who spoke “broken English” themselves, but pushed her to speak “perfect English,” something she discusses most poignantly in “Mother Tongue,” her essay on the English she speaks with her mother versus the English she speaks with the rest of the world.

There and in other essays, Tan explores what it means, linguistically, culturally, professionally, to be a hyphenated American, when she thinks of herself as just an American, albeit one with family in China. Several times she expresses both the pressure she feels as a representative of “women’s writing” and “Asian-American writing,” or even worse, “People-of-Color writing,” and her distaste of such labels: she considers herself an “American writer,” and dislikes the trend of lumping writers together based purely on their ethnicity, even though that may be necessary to showcase writers who otherwise would be ignored. As with everything else in her writing, Tan does not shy away from the difficult questions, and perhaps that is why her writing is so good.

Reading “The Opposite of Fate” is not the same as reading Tan’s novels: it by its nature lacks their grand sweep and narrative drive. But it is fascinating, illuminating, and may leave you laughing or crying, or both, as well.