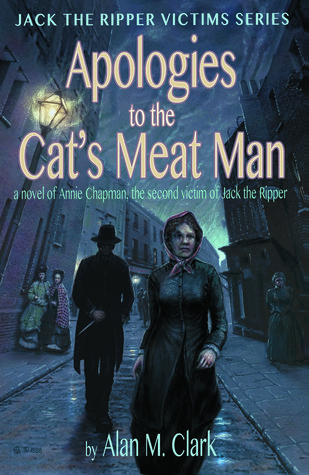 Although serial killers are not normally my thing, I’ve been reading these illustrated novels based on the lives of the victims of Jack the Ripper with interest. Rather than focus on the pathologies of Jack the Ripper’s mind, and the goriness of his methods, this books put the spotlight on how his victims lived, and how and why they came to be walking the streets, easy prey for anyone who would attack them. “Apologies to the Cat’s Meat Man” follows the life of Annie Chapman, the second victim.

Born into a poor working family in London, Annie as imagined here is a tender and squeamish child, sickened by the sight and smell of the manure and raw sewage that surrounds her, and unable to bear her own or others’ pain. The life of poverty and privation that she, like thousands of other in Victorian-era London, is condemned to, grinds her down, though, wearing away her natural delicacy and driving her to follow in her father’s footsteps, becoming an alcoholic who, like her father before her, alienates her family with her outbursts and erratic behavior. By the time the novel opens–Annie’s backstory is told in flashbacks that alternate with her current situation–she’s separated from her husband and living in a grim rooming house, paying her rent by performing sexual acts for an unsavory man who, it turns out, is keeping more than one woman in the same building. Completely broke, Annie finds herself homeless and walking the streets at night, desperately searching for a client or just a place to lie down–some of the most vividly rendered moments in the book are when Annie and other groups of homeless people are forced to trudge for hours through the dark, not allowed by the police to sleep on the streets until the sun rises.

Annie’s story is inherently dark, and we know before we begin how it ends. Still, this book brings her to life as a gentle, sensitive girl caught up in the destructive meatgrinder of London and the Industrial Revolution. Society was changing, technology was allowing people to live better than ever before, but for many people this “forward progress” meant living jammed together in filth, desperately chasing after piece-work and competing with all the other job-seekers flocking to London, until they were used up and discarded like so much trash. The tragedy of Annie’s life was not that she was murdered by a serial killer; it was that her whole world treated her much as Jack the Ripper did: as a worthless object to smash and then throw away. Annie’s death here is both a tragic end to a life that had very little value to hardly anyone, including its possessor, and a release, returning Annie to the state of purity and grace she had once known as a child. A simple and yet moving story of the life of a woman who achieved notoriety with her death.

I received an advance copy of this book from the author with no expectation of a review. All opinions are my own.