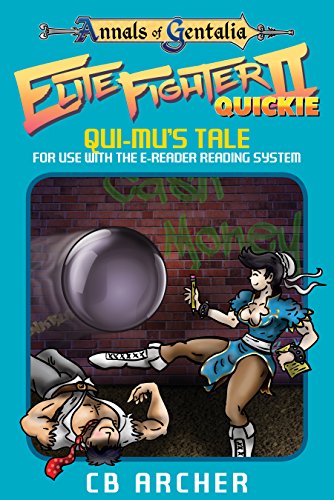 Oh goodness! It’s hard to pick a favorite amongst the zany Tales of Gentalia, but “Elite Fighter II” is awfully good. It relies in part on in-jokes and cameos from the other Tales and the Annals, so if you haven’t read those, you might not get everything that’s going on here, but if you’ve enjoyed the other Tales, “Elite Fighter II” is a juicy meta-commentary on the rest of the series.

In contrast to most of the other Tales, the main narrator here is female and straight, the super-intense Qui-Mu, who can’t help but win all her games and overwhelm all her would-be friends with friend requests and fanfic. She’s the best at her chosen game, till she meets her match in the Hashtag Queen herself, Lizzy, soon to become Lissa of the Annals. This sets Qui-Mu off on a quest to become broken so that she can take part in the sexy fun times the other characters are having, but which have hitherto been unavailable to her.

While there *are* sexy good times in this Tale, the focus is less on the naughty bits and more on having fun with the narrative structure. Qui-Mu has read all the other Tales and knows how they work, so instead of going with the flow, she engages the narrator directly, before stuffing him into a text box and taking over the story herself. It’s goofy stuff, but it’s high-level goof, existing both as a work of fiction and a commentary on how fiction works, and it ensures that the formula doesn’t grow stale.

Readers should be aware that this is erotica of an anatomically impossible sort, and also that the formatting requires a fairly advanced e-reader (I use my iPad). But if all that piques your curiosity, by all means jump in with this Tale, which aside from being hilarious, is a very low-priced and quick-reading introduction to what is turning into an epic series that can be enjoyed by fans of fantasy, gaming, and erotica alike.