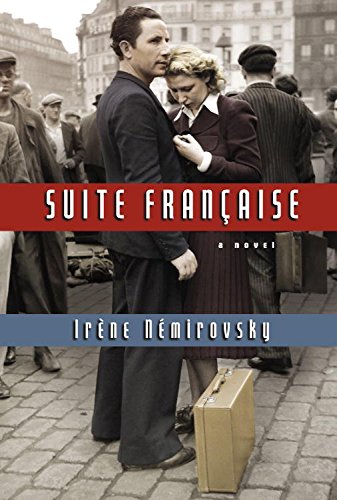 “Suite Francaise” is an astounding book, but even more astounding is the story behind its composition. Born in 1903 to a well-to-do Jewish family in Kiev, then part of Russia, Irene Nemirovsky, the author, was forced to flee in 1917 first to Finland, and then finally to France, where, still in her 20s, she made her name as a novelist writing in French. In 1941, living in occupied France, she began “Suite Francaise.”

The novel as she conceived it was to consist of 5 parts and be approximately 1000 pages long. What was completed and made available is only the first 2 parts, “Storm” and “Dolce.” Each follows a set of interconnected characters, “Storm” during the evacuation of Paris in 1940, and “Dolce” during the occupation in 1941. The narrative is multi-faceted, complex, and fragmented, and while “Dolce” does come to a sort of conclusion, the fact that Nemirovsky was unable to complete the remaining sections means that the novel ends on a cliffhanger of sorts. We are fortunate to have Nemirovsky’s notes, which tell us how she intended to end the novel, but, sadly, we will never be able to read the fully realized conclusion as she intended it. While this leaves the reader dangling at the end of book, this should not be a reason not to read what we do have: even half-completed, the novel possesses plenty of narrative momentum, and its close-up portraits of individual characters, particularly the female ones, are tours de force, reminiscent in their own way of the perceptive vision of the mature Jane Austen of “Persuasion” or “Mansfield Park.”

Although this is a war novel, there is very little that is warlike about it. Most of the characters are civilians, frequently women and children; the soldiers who feature in the narrative as point of view characters are depicted in hiding, if French, or as fairly peaceful occupiers of the French countryside, if German. Tragedy and atrocity are present, but often distantly: characters worry about their captured relatives, and about the possibility of reprisals by the Germans for individual acts of violence, but the German occupation of France was not the Eastern Front. The French resent the German occupiers, and many consider them alien barbarians, but in fact, as the story makes clear over and over again, they had much in common. Indeed, some of the most poignant moments in the narrative are occasioned by the budding romances between lonely German officers and young Frenchwomen full of native joie de vivre, dissatisfied with their unsympathetic and/or absent husbands, and thirsting for a fellow cultured soul with whom to have a conversation. While collaboration with the Germans is not condoned, neither is it condemned: Nemirovsky seems to feel genuine sympathy and understanding for those who found themselves, out of desperation, attraction, or sheer blind foolishness, consorting with and even supporting the invaders.

Nemirovsky’s sympathy may have, like her appreciation for the chaos of the evacuation of Paris, had a biographical background. Concerned by the anti-Semitism sweeping across Europe in the 1930s, Nemirovsky and her family converted to Catholicism in 1939, and Nemirovsky published pseudonymously in the anti-Semitic newspaper “Gringoire.” Tragically, it was to no avail: Nemirovsky and her family were named as Jews in the census and forced to wear the yellow star, while Nemirovsky was unable to continue publishing. In the summer of 1942 she was arrested, and the final section of the book includes her husband Michel’s increasingly frantic letters to anyone he thinks might be able to find her and effect her release. Instead, he was arrested himself, and they both died in Auschwitz. Their older daughter, still a child, managed to save the manuscript of “Suite Francaise” as she went into hiding, thinking it was her mother’s diary. The fact that it contained a novel only came to light years later.

While the story behind the story is in many ways more sensational than the novel itself, the novel, even unfinished and in pieces, is a complex, thought-provoking, heart-wrenching, and unique addition to WWII literature, well worth reading by anyone interested in the period, or anyone who appreciates psychological depth in their fiction. A triumph of a book on so many levels.

Get it here: Suite Française