Hello all! Welcome to April. It’s certainly been a damp one here in North Carolina, just like all the previous months since, oh, August. There was a brief glorious moment when my basement floor was not actually swimming in water, but that, alas, has passed.

I guess this should be our theme song

Since, as those of you who have been following my postings for a while know, I developed a severe toxic mold sensitivity as a fun side dish to my late-stage Lyme disease, I’m not thrilled about all this dampness. The main culprit for the mold issue appears to be my workplace, and since I started medical leave I have regained a tiny bit of my ability to walk, but still. As I complained about last time, my recovery such as it is has been extremely slow and subject to lots of downs as well as ups. And don’t get me started on the raging whole-body yeast infection that’s been plaguing me all winter and spring (sorry for the TMI, but that shit is BAD. In fact, at the moment it’s my biggest problem by far).

Anyhooo, suffering ennobles, and misery is a great subject for literature, or so generations of Russian writers would tell me. Which may be why I decided for my next series to leave Russia behind and go to sunny Italy instead. 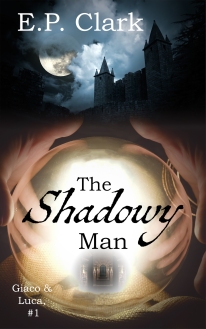 You can pick up a free ARC of “The Shadowy Man,” the first novella in the series, in the Spring into Fantasy Giveaway

The series, tentatively titled the Giaco & Luca Series after its main characters (I know, super imaginative, right?), is currently made up of three novellas, with the possibility of more in the future if the spirit moves me. As I mentioned in my last post, the inspiration came to me when I had a very vivid dream of the first two chapters of “The Shadowy Man.”

As you might guess from the title and cover, the series is set in sunny Italy, or at least a fantasy world based off of Renaissance Florence, but most of the action takes place in darkness. It’s not actually that bright and sunny a work. But I did and do enjoy working on it immensely, both because I’m fond of the characters, and because it gives me a chance to revive my Italian. (Fun fact: I used to live in Milan and spoke quite fluent Italian. Those were the days…).

It’s also fun for me because it combines my love of fantasy with my love of mystery and suspense. The plot of “The Shadowy Man” involves in a search, using clues gleaned from fortune tellers. I envisioned the series as a bit like the “Roma Sub Rosa” mystery series, only set in a fantasy version of Renaissance Florence rather than Ancient Rome. Other readers have said it reminds them a bit of the Harry Potter books.

Here’s an excerpt. Giaco, the main character, is going from fortune teller to fortune teller, trying to get information about where Luca, his charge, might have been taken by the shadowy man:

Soon they were all leaving the fortune teller’s rooms and walking down yet another dark and dirty alley. Giacomo doubted he had seen this many nasty alleys in the ten years he had lived in Fiori.

They came to a rickety wooden house on the edge of the city. The fortune teller opened the door without knocking, and led them up a steep staircase so narrow that Giacomo’s shoulders kept brushing the walls on either side. There was a strong smell of dust and old wood.

The man in the room at the top of the staircase was so fat Giacomo doubted he could squeeze himself out of the room. He must be trapped there. He was sitting in an armchair at the head of a small table.

Besides the fat man and his chair, the room itself held only the table, four straight-backed chairs, and, in the middle of the table, a massive crystal ball that drew the eye and refused to let it go. Giacomo could hardly tear his gaze away from it, even when he was being introduced to the fat man, who was called Andrea.

“Andrea is the best ball-gazer in the city,” the fortune teller explained. “Most of us can catch no more than the occasional glimpse, but Andrea reads his ball the way other men read books.”

Andrea, who was too fat to bow, only inclined his head in response.

Everyone sat down at the table without speaking. The fortune teller handed the diagram of his casting to Andrea.

Andrea studied the diagram in silence for a long time. Then he placed it face-down on the table, blew gently on his hands, and cupped them over the crystal. It began to emanate a warm glow. He bent closer, shielding the ball with his hands so that the others were unable to see its images.

He watched for a surprisingly long time, occasionally emitting faint grunts and exclamations and tilting his head this way and that. After a while he seemed to be satisfied, for he let go of the crystal and straightened back up. He pulled out a quill and ink pot from a shelf under the table, wrote something on the diagram, and pushed it over to the fortune teller.

“Give him a soldo,” the fortune teller ordered Giacomo.

“What did he see?” asked Giacomo.

The fortune teller handed him the diagram. Beneath it was written Street of the Apothecaries, 19.

“What is this?” demanded Giacomo

“What he has seen,” replied the fortune teller. “Give him a soldo, and let us be on our way.”

Giacomo reluctantly handed over a bronze coin. A soldo seemed too little to give for information that was actually useful, but too much for what Andrea had done.

As soon as he set the coin down on the table, the fortune teller snatched up the diagram and led them out the door, bowing repeatedly to Andrea as he did so. It struck Giacomo that the fortune teller was afraid of Andrea, even though he had brought them to him of his own free will.

“Andrea has seen something of me that I do not like,” the fortune teller said, once they were outside again. “Truly, his gift is frightening. What I do–it is mostly the reading of signs. Anyone could learn to do it, if they had the patience. But Andrea has powers denied ordinary men.”

“Andrea has told us all he wishes for us to know,” the fortune teller replied. “Do not go back. Let us make our way to the Street of the Apothecaries instead.”

And now for giveaways!

Or, if you don’t yet have a copy of it, you can grab a free copy of my short story collection “Winter of the Gods and Other Stories,” plus bunches of other free fantasy, in the April Fantasy Madness Giveaway

The Spring Speculative Fiction Promo has almost 200 free books in all genres of speculative fiction!

Looking to get started on a new series? The Spring Time is Prequel Time Giveaway has free prequels for dozens of fantasy series.

2 thoughts on “Shadow and Flame: Working on My New Fantasy Series (And This Week’s Selection of Giveaways)”