Lads, lads, lads! By which I mean mainly ladies. It’s here! It’s finally here! The official launch of The Dreaming Land III: The Sacrifice is upon us, and in celebration of that, it’s free on Kindle December 15-19. 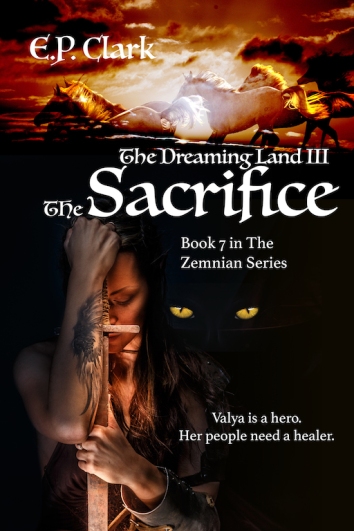 Grab a free copy of TDLIII for Kindle here. And as always, a huge thanks to reviewers past, present, and future!

Releasing the last book in a series is always a big moment. Is, you might be asking, TDLIII the last book in the series? Well, it’s always possible that I might go back and revisit the story later. In fact, it wouldn’t surprise me for a minute if I did. But for the moment I’m planning to let the story rest and come to some kind of temporary conclusion as I go on to other projects (more about that soon).

As for what that conclusion is, well, that’s open-ended. Each mini-series within The Zemnian Series, as well as the series as a whole, is less about external events and more about internal revelations. Without giving away too much, I’ll say that The Dreaming Land mini-series ends with a certain amount of resolution of the external plot, but with a very important moment of internal resolution for Valya, its heroine. After struggling all series with her (justified) heartbreak and her (justified) outrage at the slave trade and other iniquities that take place on home soil, she reaches an important realization, one that promises to make things better not only for her but for all her people. As I wrote in a previous post, Valya is modeled off of Eowyn from The Lord of the Rings, but an Eowyn with much more agency, and, let’s be frank, a good deal more inner fire, too. Valya’s inner peace comes not from resignation to her situation and a return to passivity, but from the clarification of her healing mission and a commitment to active striving. As Valya tells her second-sister (first cousin) Sera towards the end of the book:

“But you and I…we can act to change it. We must act to change it. Because we can’t live in a country, in a world, where people sell their children into slavery because it’s the best choice they have. That can’t be the best choice they have, and if it is, we need to…instead of telling them to sell their children because it’s their best choice, we need to make it so that they have better choices. And I think…I think now we can. And we can because…you know, I like to win, I always have, and I sometimes—well, often—want to break the world over my knee like kindling.

“Only now I think that that would be…not winning. It would seem like winning at first, only it wouldn’t be. We don’t need to break the world like kindling, because then we’d have nothing but a broken world, quickly burnt to ash. We need to bend it as we would a living willow branch. Bend it so that it still lives, but forms the shapes it needs to. And to do that we’ll need to change. We’ll need to…oh, so many things, but we can’t go taking all the time, taking and not giving. We were given a gift, and now we have to give back. We can’t go taking from the mines and poisoning the earth and the water, we can’t go taking from the people who work them, the people who are no better than slaves, whatever we might tell ourselves, we can’t go killing the creatures that serve us and hunting down all the animals in the forests until there aren’t any left, and then we look around and wonder why we’re all so hungry, we can’t go taking from others, from everything around us, like heedless children, certain that we are the center of everything and everything belongs to us.

“And so we’re going to have to change. I don’t think it will happen right away, but it will, if we try hard enough for long enough. That’s the main thing, to try hard enough for long enough, and not to quit, not even when you want to give up and scream in frustration and never try ever again, not anything. So that’s what we’ll have to do. And we’ll have to…Princess Velikokrasnova was right about this, we’re too closed off from the rest of the world. We’re afraid of the world, and so we closed ourselves off from it. And we’re right to be afraid of the world, because the rest of the world is afraid of us, the rest of the world would be more than happy to hurt us, but…we still have to open our arms to them, because that’s what will make us strong. We are strong enough to take them, so we have to be strong enough to take them in, the kind of taking that is giving instead of stealing. We have to find the strength to open our hearts up to them in their time of need, because that will make us stronger. So there will be change—well, there will be change no matter what we do, or want. Change is inevitable. But if we are brave and strong, we can make it the kind of change that needs to happen.”

I may have been making a pointed commentary about contemporary events in the “real world” there. Maybe.

Anyway, if you want to contemplate philosophy and ethics while reading an epic fantasy novel with a kick-ass heroine who don’t take no nonsense from no one, you can grab your free copy of The Dreaming Land III: The Sacrifice here.

And that’s not all! I’m also participating in several group giveaways this month, so here’s your chance to pick up literally dozens of free fantasy stories for absolutely nothing. Links are below.

The Historical Fantasy and Fiction Giveaway features books with a historical slant.

One thought on “Giving More Than You Take: Fantasy and Philosophy (And Free New Books!)”