Lyme Madness: Rescuing My Son Down the Rabbit Hole of Chronic Lyme Disease 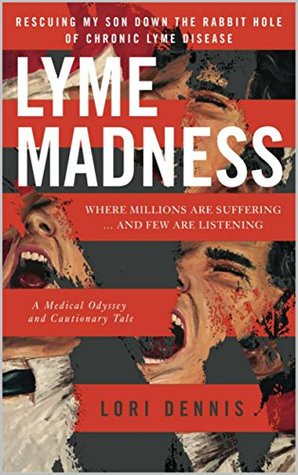 Lori Dennis’s story is crazy–unless you’ve fallen down the rabbit hole into Lymeland, as she calls it. Then it all makes sense.

She was transported to Lymeland when her son Matt became mysteriously ill after graduating from college and starting a new job. At first everyone thought it was just anxiety about this new transition in his life. But then it became apparent to him and his parents, although not his doctors, that something was really wrong. 20+ doctors later they finally had answers, although not necessarily a cure.

“Lyme Madness” is partly Lori and Matt’s story, part the stories of other Lyme patients, and part a history of Lyme disease in North America. Dennis is from Toronto, while her son was living and being treated in New York, so she has witnessed the poor treatment of Lyme patients in the US–and their even worse neglect in Canada.

Like many Americans, I often envy what seems like the idyllic health care conditions in Canada, but tragically, for poorly understood conditions such as Lyme disease, the Canadian socialized health care system is even worse than the US’s patchwork, profit-driven non-system. Both turn their backs on patients and condemn them to a life, and sometimes death, of appalling suffering. However, the government-provided health care in Canada is even less responsive to Lyme patients’ needs than that of the US, with a lot of active denial of the existence of Lyme disease in Canada, despite its prevalence in New York and New England, just across the border.

“Lyme Madness” is an impassioned plea for more awareness and better treatment of Lyme disease and its patients. Dennis is rightfully very angry over what happened to her son, so much so that people who have not (yet) been deported to Lymeland may find her passion off-putting. She also discusses controversial or unproven treatment approaches, some of the conspiracy theories, such as that of the bioweapons research facility on Plum Island accidentally or intentionally releasing the disease, and the problems with the Lyme vaccine and the interactions between Lyme disease and the flu vaccine. This may also make strict adherents to mainstream medicine uncomfortable, but, as she points out, Lyme patients are not given better options. The mainstream has at best turned its back on us, and at worst engaged in an aggressive program of gaslighting and abuse, often using “mental health” as its weapon of choice. It is therefore particularly welcome that Dennis, a psychologist, is speaking out against the (mis)use of mental health diagnoses and treatments on Lyme patients. I’m not sure how many doubters this book is going to convince, but it has an important message and it’s good to get more voices of patients and their families out there.