Bite Me: How Lyme Disease Stole My Childhood, Made Me Crazy, and Almost Killed Me 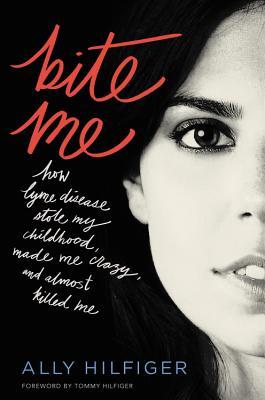 “Bite Me’ is one of a growing group of celebrity memoirs about their terrible experiences with Lyme disease. Some commentators have wondered how so many people rich people are getting Lyme disease, to which the answers might be 1) poor people get it too, they just can’t get diagnosed and the rest of society is more than happy to go on ignoring them, and 2) having a country house in Connecticut is a major risk factor.

In any case, leaping over the whining and complaints from a certain sector about all the attention given to (mainly female) celebrities speaking out against Lyme disease, as if it’s okay to be a misogynist jerk to desperately ill people as long as they’re “privileged” in certain tick-the-box ways (not having a terrible illness is *also* a privilege, ladies and gentlemen, maybe the most important one there is), it’s nice to see Ally and others like her speak up about their experiences. If it takes a bunch of reality tv stars and other incredibly rich and good-looking people telling their stories to raise awareness, so much the better.

Perhaps the most depressing thing about Ally’s story is how difficult a time she had getting diagnosed, despite having rich and powerful parents who did everything they could think of to help her. She was probably infected at the age of seven. Her mother not only saw the tick but saved it and took it in for analysis, but they were told that the results were “inconclusive,” as was Ally’s bloodwork, so obviously it couldn’t be Lyme, despite the fact that the Hilfigers spent a lot of time in suburban Connecticut, the epicenter of the epidemic.

So when Ally started experiencing such severe joint and muscle pain that she could no longer sit still, and lost the ability to do basic math after previously being a stellar student, she was diagnosed as “learning disabled.” It was clear that something that was very wrong with her all throughout her teens, so much so that she ended up being institutionalized for drug addiction (she was constantly smoking pot for the pain), but it took 11 years of illness and months of institutionalization before she was properly diagnosed with Lyme disease, plus co-infections. And then came the saga of treatment…

Hilfiger tells the story of her Lyme disease mixed in with the rest of her life, so there’s plenty there about her acting and her fashion designing, which would probably be of more interest to other readers than to me. This is more a personal story than it is a story of Lyme disease as an entity, but there’s plenty of information about the disease too, as well as the unpleasant decade of treatment Ally underwent following finally getting her diagnosis. Hopefully Hilfiger’s celebrity will bring in readers who might not otherwise be interested in the disease but just want to read about what was going on behind the scenes of”Rich Girls,” and who might learn a thing or two in the process. Like what to do and where to turn if your previously active and intelligent child develops a mysterious problem that leaves them confused, exhausted, and in pain for years on end, and everyone keeps insisting it’s ADHD, learning disabilities, oppositional-defiance disorder (!!! How is this even a diagnosis!), anxiety, depression, an “aversive personality” (one of the diagnoses I received), etc. etc. etc.