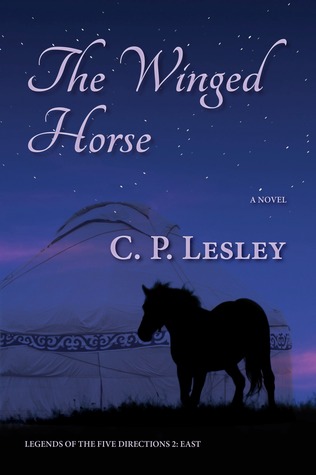 “The Winged Horse” starts up shortly after “The Golden Lynx” ends. This time it’s Ogodai, the dutiful older brother of spitfire Nasan, the heroine of the first book, whose story gets told.

Ogodai, oldest son of the khan Bulat, has been betrothed to Firuza, daughter of a bey amongst the Nogai, since childhood. When he receives a summons from her calling him to assume his position as her fiance and win the rule of her tribe after her father’s mysterious death, he goes–only to discover both more intrigue, and more romance, than he had been expecting.

“The Winged Horse,” like “The Golden Lynx,” is historical romance, and is likely to appeal to fans of the genre, with its central story of 16th-century lovers struggling to bring romance to an arranged marriage. However, it stands out from run-of-the-mill works of the genre by its particularly close attention to period detail and its setting, amongst the Tatar tribes in what is now Russia, as they jockey for position amongst each other and negotiate their relationship with the rising power of Muscovy (Ivan the Terrible, who would go on to smash the khanate’s power over Russia once and for all, is currently a small child). The setting is exotic for Western readers, but the characters are natural and sympathetic, particularly Firuza, a serious and dutiful young woman who dreams of being a leader in her own right and ruling with as much authority as a man. Fans of Russian and Central Asian history are also likely to enjoy this book, which is a light quick read but is backed up with extensive knowledge of the cultural and historical setting. A good summer read for readers looking for something a little lighter than school fare but that isn’t just complete fluff.