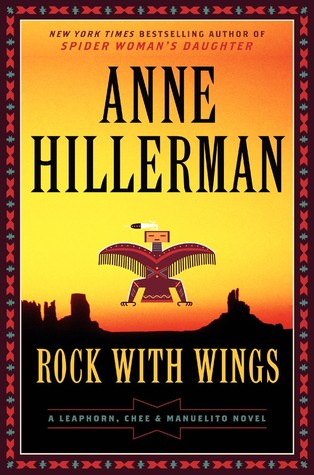 In “Rock with Wings,” Anne Hillerman continues to rework her father’s mystery series set amongst the Navajo police force in the Four Corners region. As with “Spider Woman’s Daughter,” her previous book, she focuses on Bernie Manuelito, the female police officer whom her father introduced late in the series.

The focus on Bernie and her relationship with her mother and sister gives a welcome addition of depth to the book, emphasizing women’s relationships and the issues that Navajo women face, as well as the changing nature of Navajo society. As with the previous books, the highlight of the book is not so much the mystery itself, although there is enough of it to keep the reader interested until the end, but the cultural side of the story and its look into Navajo culture. Hillerman aims to put the reader, who is presumably not Navajo, into the heads of her Navajo characters, who look on mainstream white culture from the outside. It’s probably a salutary experience for many readers, although some of the ways in which it is handled may alienate readers more than it draws them in–I for one am never going to sympathize with a character who doesn’t like dogs, no matter what their reasons or how culturally appropriate it is. Still, it’s for the most part a fun read and gives a fascinating glimpse into a world that most Americans are ignorant of, and there are some genuinely tense and/or creepy moments involving skinwalkers that will raise the hairs on the necks of suggestible readers.

Want to get a free copy of my short story collection Winter of the Gods and Other Stories?  Sign up for my mailing list and get updates and special offers?  You can do both here.