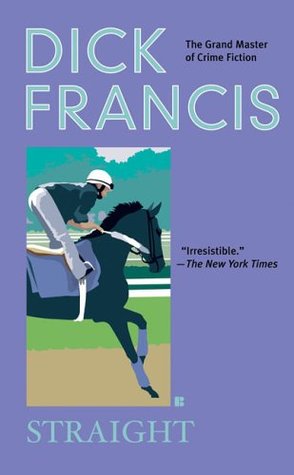 “Straight” has always been one of my favorite Francis stories, and I’m not sure why. The main topic–gemstones–holds absolutely zero interest for me, and neither do the clever gadgets that the main character has to figure out.

But maybe that’s why it’s interesting. The chances of me ever wearing lots of gems, or getting involved in the industry in any way, are remote to say the least, which is part of the fascination: Derek also has zero interest in gems to begin with, but, forced to run his brother’s business after his brother’s untimely death, he learns an appreciation for them, something Francis describes in almost sensuous terms.

Balanced against the sensuality that courses through “Straight,” bursting out even from the title–which refers to many things, including the main character’s sexuality–is the flip side of physical pleasure: the destruction, psychological and physical, that the characters experience. Rather than one explosive encounter, it’s a slow process: Derek’s brother slowly slips away as his life support is turned off one machine at a time, key relationships slowly erode, and Derek’s ankle is damaged over and over again, until it’s rendered mechanically useless. And then the two sides come together in a sudden epiphany, solving the final mystery of the book.

Francis doesn’t delve so much into social issues in “Straight” the way he does in some of his other books, and it doesn’t have quite the same soul-searching as books like “Come to Grief” and “To the Hilt” do, but, as befits a books about gems, it may be one of his most elegantly constructed and written books, the plot beautifully balanced, the language lapidary and clear. A pleasure to read, whatever your inclinations are.