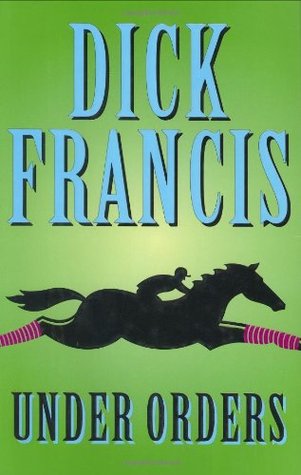 As one of the last acts in the twilight of his career, Dick Francis took his favorite character, Sid Halley, out for one last race.

Things have changed a bit since Sid Halley first appeared, back in 1965. As part of the time warp I mentioned in one of my earlier reviews, Sid has only aged about 10 years in the intervening 40, but he’s changed a lot for all that. He’s no longer the bitter, lonely man he was at the beginning, but has success, respect, and a very attractive and intelligent girlfriend–he gets a new one in each book, each one prettier, smarter, and more successful than the last (one has to give Francis his due: his heroes tend to find intelligent and successful women to be powerfully attractive, even as they negotiate a very uneasy line vis-a-vis feminism and liberal or left-wing political movements in general–at heart they’re lone wolves who, like Tsvetaeva, are made squeamish by any kind of -ism, since subscribing to an -ism would force them to come face-to-face with their own radicalism…but that’s a topic for another essay).

In fact, in some ways Francis’s late works come full circle back to where the earliest ones started, and engage in some of the fairly blatant wish fulfillment that we see in books like “Dead Cert.” His work, while to a certain extent quite uniform, can be divided into definite periods: the zany capers of the early 1960, such as “Nerve” and “For Kicks,” the exploration of very dark themes of the late 1960s, starting with “Odds Against,” the first Sid Halley book, the jet-setting, comparatively light-hearted stories of the 1970s, in which his characters have wild adventures in exotic locations such as South Africa (Smokescreen), Australia (In the Frame), or the Soviet Union (Trial Run), the intense family dramas of the 1980s, of which “The Danger,” “Hot Money,” “Straight,” and “Longshot” all stand out, along with the Kit Fielding books–the 1980s may have been Francis’s golden era–the alternatingly dark and lyrical works of the early 1990s, such as “Wild Horses,” “Come to Grief,” and “To the Hilt”, and then the much slighter (in my opinion), almost sketch-like works of his late period, beginning with “Second Wind.”

“Under Orders” is more substantial than some of his other late works, and is certainly well worth reading, but in some ways it’s more like a gentle canter through a greatest hits album rather than a headlong gallop through new terrain (yes, I mixed those metaphors on purpose). Still, Sid Halley is such a magnetic character that it’s almost impossible to go wrong with him, and there are some of Francis’s trademark heart-in-your-mouth action sequences created out of seemingly ordinary, everyday materials. And if you’ve been following along with his adventures for all this time, it’s rewarding to see him finally get all the things he deserves. “Under Orders” isn’t Francis’s strongest work, but it is likely to warm the hearts of long-time Francis fans everywhere.

A reminder that The Breathing Sea I is shortlisted in the Literary category of The 50 Best Indie Books of 2017!  Votes are much appreciated and can be cast here.