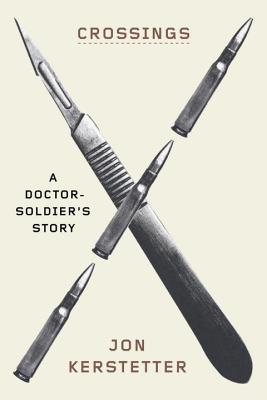 “Crossings” is subtitled “A Doctor-Soldier’s Story,” but there’s much more to it than that. It chronicles Jon Kerstetter’s service as a flight surgeon in Iraq, but it also tells the story of his whole life, in which his tours in Iraq are just a small part.

The son of a single mother from the Oneida reservation, Kerstetter dreamed of becoming a doctor from childhood, but had to overcome a series of obstacles first. In college he was steered away from medicine, because, he was told, Native students couldn’t handle the coursework. He only ended up going to medical school more than a decade later. He was also initially steered away from the military, finally enlisting in the National Guard at an age when many soldiers are already eligible to retire.

Once there, though, he found his calling in emergency medicine, often in areas in crisis. He discusses how he was drawn to high-adrenaline environments where he could make a difference, volunteering to go first to Rwanda following the genocide there, and then to the Balkans. While his experiences there were humbling, he also found them rewarding, and welcomed the chance to go to Iraq and use his skills there.

Some of Kerstetter’s experiences in Iraq were truly bizarre, and must be read to be believed, but the real adventure begins when he returns home and has to deal with a myriad of crippling health problems. The fact that he completed the book at all is a testament to his will to succeed.

“Crossings” refers to the different border crossings, physical, psychological, and spiritual, that Kerstetter makes throughout his life, as he transitions from poor kid from the res to doctor and soldier and then to patient. The prose style is for the most part simple and direct–Kerstetter writes like the doctor and soldier he considers himself to be–but some of his meditations on the changes he undergoes in his life are profound, and will probably resonate with many doctors, soldiers, and patients dealing with life-altering conditions. An affecting story about an interesting life.