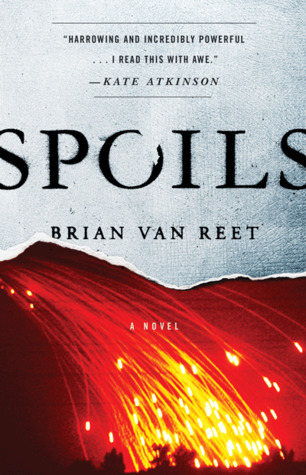 Specialist Cassandra Wigheard is a tough girl from Arkansas who joined the army looking for adventure. What she got was deployment to Iraq and lots of close proximity with aspiring rapists, first from her own comrades in arms, then from the mujahideen who capture her and want to use her as a propaganda piece against the US.

All three characters are sympathetic and well-rounded, even as they go against their stereotypes: Cassandra as the gung-ho tough girl who has to act smart in order to survive, Sleed as the accidental screw-up, and Abu Al-Hool as the older fighter who is starting to wonder if things are going the right way. The intercutting of the different points of view builds the tension in the masterful manner of a suspense novel, so fair warning: although this book is less gruesome than some (which is not to say it doesn’t have its gruesome or simply squeamishness-inducing moments), it can be hard to read simply because of the growing tension. The prose style is more lyrical than the profanity-laced terseness often affected by war writers, although it tends towards the spare rather than the lush, not wanting to get in the way of the escalating action, most of which takes place inside the characters. In short, “Spoils” is a war novel that is more than just a war novel, but a genuinely good piece of fiction that uses the Iraq war as the ground for an examination of the human experience.

One thought on ““Spoils” by Brian Van Reet”