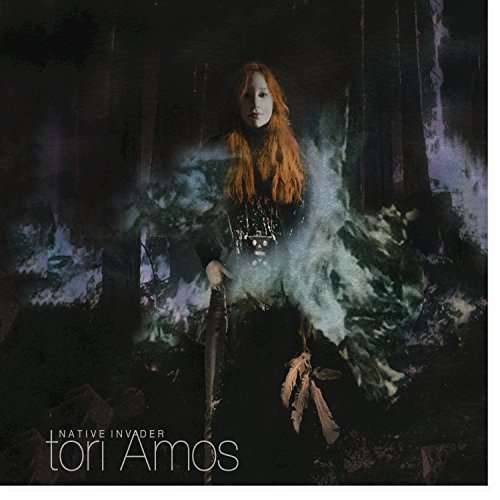 That notwithstanding, my love for Amos’s music was always hemmed around with criticisms and caveats.  She was brilliant, so brilliant, but…but her albums were long and weird, with songs that ranged from unbearably raw (I’ve only been able to listen to “Me and a Gun” all the way through maybe once in my 20+ years of owning the album) to the intolerably silly (“Hello Mr. Zebra,” anyone?).  And I found a lot of her later work, with the exception of “The Beekeeper,” to be unapproachable.  Why couldn’t she just settle down, streamline her production, and only focus on making music that made me, personally, happy?

So I approached the release of her latest effort, “Native Invader,” with equal parts excitement and apprehension.  Would it be brilliant?  Would it be ridiculously weird and over-conceptualized?  Or would it be both?

The answer, of course, is that it’s both.  Having listened to it daily for a week now, I can say that it’s entered my personal canon of favorite Tori Amos albums, up there with “Under the Pink,” “Boys for Pele,” “From the Choirgirl Hotel,” and “The Beekeeper.”  It showcases Amos’s soaring vocals and delicately luscious piano work, her ability to create a sound that’s both catchily melodic and completely unique, and lyrics that are in turn earnest, mystical, profound, and just plain silly.  As a listening experience it’s lovely and soothing, with some beautiful stand-out tracks such as the ethereal “Reindeer King” and gospel-tinged “The Climb.”

Conceptually, it is more obviously unified than many of Amos’s previous albums.  Other reviewers have already noted the overt environmentalism of its message, and indeed, that takes front and center in many of the songs, showcasing Amos’s talent for combining the personal and the political into art: what would have sounded clunky or preachy in other hands is turned here into a medium that transcends the message.

And this is certainly an album that has a message, although it goes deeper than may be immediately obvious.  The need to heal various breaches is present from the opening lines of the opening track, “Reindeer King,” in which Amos sings “Crystal core / Your mind has been divided from your soul / Now you say you are that stranger on your shore.”  This division and the need to overcome it is initially presented as personal in the early songs in the album, but becomes increasingly general and political, finishing with the final track, “Russia,” in which Amos calls for both those on the right and the left to build a bridge.

This bridge-building is not just to those outside of us.  The real split in this album is ultimately inside the protagonist, inside of us–we are the “native invaders” and “strangers on [our own] shore,” who need to be more like the chocolate in “Chocolate Song,” with its perfect tension between bitter and sweet.  Amos does not claim that she can heal that breach, but in “Native Invader,” she recognizes it for what it is, and calls for us to reunite the broken parts inside us.

Which has made me think, really think, about the nature of Amos’s art and my valuation of it.  I had been accustomed to thinking of her as “Brilliant Tori” and “Silly Tori,” and wishing that “Brilliant Tori” could get rid of “Silly Tori” so that the former could buckle down and concentrate on making music according to my strict standards of what was good, eschewing all that I thought was bad.  But listening to “Native Invader” has made me realize that “Brilliant Tori” and “Silly Tori” are really one and the same, and that the one cannot exist without the other.  Both “Brilliant” and “Silly” Tori are the organic components of “True Tori,” and a lot of “Brilliant Tori’s” brilliance is based on “Silly Tori’s” silliness.  If Amos were to strip away all the parts of her art that I considered to be extraneous or in bad taste, it would no longer be her art, but just more bland pop music.  Her albums need the lengthy digressions into weirdness to make them what they are.  Or in other words, when it comes to truly groundbreaking artists, it’s probably the things about them you like the least that make them what they are.