Embed: With the World’s Armies in Afghanistan 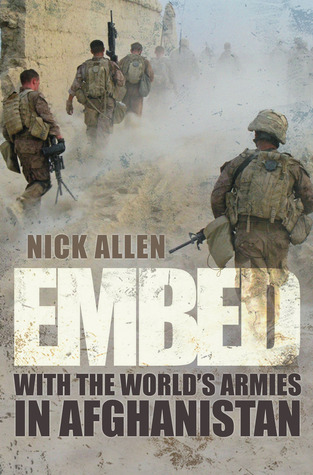 I knew Nick Allen as the translator of the excellent “One Soldier’s War,” so I was interested to read his own story of spending two years embedded with various countries’ armies in Afghanistan. I was not disappointed: it’s a fascinating book that depicted what for me was a whole new side of the current war in Afghanistan.

Allen arrives in Afghanistan in the end of 2006, back in those carefree days when the war had only been dragging on for a mere half a decade or so (just in case you, like me, have forgotten to pay attention, the war is still going on now, in 2017). The book, which is detailed and full of both black-and-white and color photographs, describes his embeds over the next two years with a wide variety of coalition forces, including the Canadians, New Zealanders, Baltic and Nordic forces, and the Royal Gurkha Rifles, as well as the Americans, who make up the majority of the forces deployed in Afghanistan (as they should!) and receive the bulk of the press, but who were in fact just one of many countries involved in the effort.

It’s easy in the US to think of Afghanistan as an entirely American action, if one thinks about it at all, and to discount the other nations who stepped up to support the US. This book, however, shows the war as a truly international effort, with all the good and the bad that comes with that. As an admirer of the Nordic countries in general I can’t help but feel that they provide some much-needed civilization to what is overall a rather nasty war, but such a broad coalition makes it that much harder for aims and strategies to be agreed on, and may lend itself to the problem of mission creep and the fact that no one ever really seemed to have a goal or a plan for Afghanistan, at least as far as I can tell.

Although “Embed” does discuss the broader issues of the war, especially at the end, for the most part it focuses on the day-to-day experiences of the soldiers, with their down to earth concerns over food, hygiene, and the danger of IEDs. And sex and porn, of course. What emerges is the picture of a gritty and dirty war–not because the soldiers are committing atrocities, but because they are literally gritty and dirty. Allen acknowledges the limitations of the embedded reporter’s viewpoint, which is inherently small-picture and tends to be skewed positively towards the hosting forces, and most of the stories are sympathetic depictions of the soldiers’ daily lives, but that is still a story that needs telling, especially for soldiers from these lesser-known countries.

Although the stories are by and large sympathetic, they are often tinged with tragedy: several of the units experience losses, including of people Allen met in person. The tragedy, however, is not allowed to become mawkish, and is balanced by humor, often self-deprecating, of “test cowers” and self-induced snake scares. I can’t say that I understand what the West is doing in Afghanistan much better for having read this book, since I rather doubt that anyone really knows, but I understand much better what it’s like for the people who are on the ground.