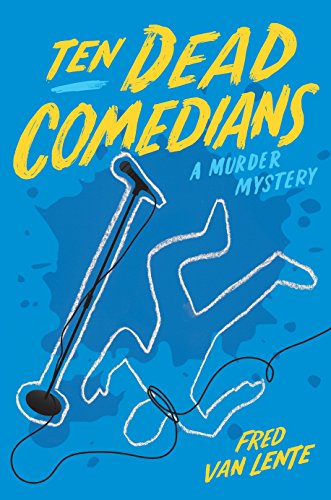 A group of comedians, all either on their way up or on their way down, is invited to a fellow superstar comedian’s private island for a mysterious project. But the project, it turns out, is killing them.

Like all good comedy, “Ten Dead Comedians” is light fare, but with a definite bite. It’s less haha-hilarious than I was expecting, but it does have that upending of expectations, that edgy attack on accepted cultural mores, that good stand-up does. The comedians represent a cross-section of contemporary American comedy, including the white blue collar comedian who pokes fun at Liberal America in a heavy (faked) Southern accent, the ultra-liberal Asian lesbian who alienates everyone around her with her crusading, the Hispanic TV show host who harasses women and gays, the washed-up improv instructor, and so on and so forth. Each character has a story, which they get to tell, exposing the sexism, racism, classism, and fame-chasing of their society, and each character has a reason why the others might want to kill them.

I won’t spoil it by saying whodunnit, but readers of this kind of thing will have a good guess, while also being satisfied by the twist that exposes the villain. The plotting is conventional locked-room murder mystery stuff, but it’s done well, with a good balance of surprise and satisfaction, and the action is page-turning. All the characters are sort of likable, or at least pitiable, and sort of irritating jerks, so it’s good that the narrative doesn’t spend too long with any of them, giving multiple points of view in each chapter. This could be confusing, but the characters are all delineated clearly enough that it’s easy enough to sort them out after a couple of chapters. Readers should be beware that the body count is high, as you’d expect, and there is some gore, although not in egregiously large quantities. In the end, “Ten Dead Comedians” is like a good comedy routine–it’s a fun piece of entertainment, with enough of a snap to it to keep you listening, and thinking about it afterwards.