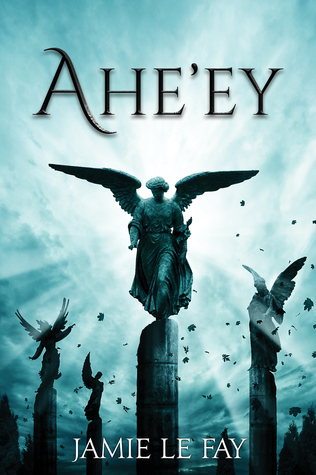 The problem with writing woman-centered, feminist, or matriarchal texts is that we don’t actually have a lot of good examples to pull from. Our art and archetypes have been filtered through millennia of misogyny, so that all the storylines, tropes, topoi, cliches, and everything else that goes into making a novel have a base setting of “sexist.” And if we want to flip things around and discuss what a matriarchal culture might actually look like, we don’t have a lot to work with: while there were matriarchal cultures in antiquity, most of what we know about them is anti-matriarchal propaganda.

I start with this because “Ahe’ey” grapples with this as its central issue, both explicitly in its subject matter, and implicitly in its composition. It’s a kind of a paranormal romance story about a human woman, committed feminist activist Morgan, who falls in love with the angelically powerful and angelically attractive Gabriel, who comes from a secret supernatural society where men are currently restricted from holding power, after a group of men led a war to enslave high-ranking, pure-blooded women and keep them as breeders.

“Ahe’ey” is at its best when it deals directly with social issues and current events. The book has an overt agenda, and it makes its position clear: it is against misogyny, racism, classism, and homophobia. Most of the action takes place in 2014, and one of the villains is an alarmingly Trump-like figure called Zanus who uses a toxic mixture of misogyny and racism to advance his pre-presidential campaign, blurting out sexist remarks while justifying Islamophobia, xenophobia, and racism by the need to protect women from predators. Zanus is considerably more villainous than Trump (at least I hope!), but is frighteningly close to the thoughts, and in some cases deeds, of a certain segment on the far right. So right-wing readers and Trump supporters are likely not to like this book at all.

However, although “Ahe’ey” in some ways conforms to the stereotypes of liberal do-goodism, it isn’t afraid to face the complexity of the problems head-on. As Vivianne, one of the super-powered characters, tells Morgan after she leads a disinformation campaign against Zanus’s and the KKK’s white supremacy: “Everything about today was a lie, an illusion. Scout is not a normal human girl, and Quinn is not as powerful as you made her out to be. You spend your life telling imaginary stories to young girls, swapping crystal slippers in children’s tales with swords. My son tells his children they can become as capable as an Ahe’ey. You both push a reality to others that you refuse to accept when it comes to your own potential. So, who is right? Is it as simple as changing a story, providing inspiration, changing a belief? Or are you manufacturing lies and raising hopes without merit or justification? Are men bad and women good? Are men strong and women weak? Does race matter? Genes or beliefs, which is it?”

This problem of nature vs. nurture is front and center throughout the story, as is the issue of causing harm by doing good. Morgan’s successful online trolling of white supremacist groups sparks a violent backlash against the girls she’s trying to nurture, and the angelic, god-like Ahe’ey live in an oppressive and rigidly hierarchical society of their own making, as “each flawed decision, taken with the best intentions, had the power to corrupt and distort the humanity and purity of their vision and values. In their nightmares lived a demigod who decided to fight inequality and racism by raping women. Power corrupts, and hell…hell is filled with good intentions.” While there is a certain white-hat-black-hat element to the characters, everyone thinks they are acting for the best, and everyone has their reasons for doing bad things. As a liberal and committed feminist who is increasingly frustrated by the simplistic self-righteousness of my own side, and the belief that all that is needed is for a few smart people to start a revolution, I found “Ahe’ey” to be refreshingly multi-sided, while also maintaining its core beliefs.

Which is not to say that the book, like its characters, is not without its flaws. There’s a huge amount of backstory and side-story, not to mention multiple mythologies, all jammed in there together, as well as the political/social commentary, which sometimes means that internal character development and momentous external events all proceed at a tremendously rapid pace, despite the overall length of the book. The central focus of the book is on developing its ideas, not its plot or its people, and sometimes that told on the artistic side of things.

Nevertheless, “Ahe’ey” is a bold and ambitious effort, one that is not afraid to jump into thorny issues, and a welcome and thought-provoking addition to the (all too small) genre of feminist fantasy fiction.